The Polish Arms Museum
The centre is within the paid parking zone and the network of one-way streets. Getting to the area of ​​interest by E. Gierczak Street is only poss...
04-07-2015 ·
Fort Zachodni [The Western Fort]
Świnoujście
Home / Discover / Pomorze heritage / Fortifications and military structures / Fortifications 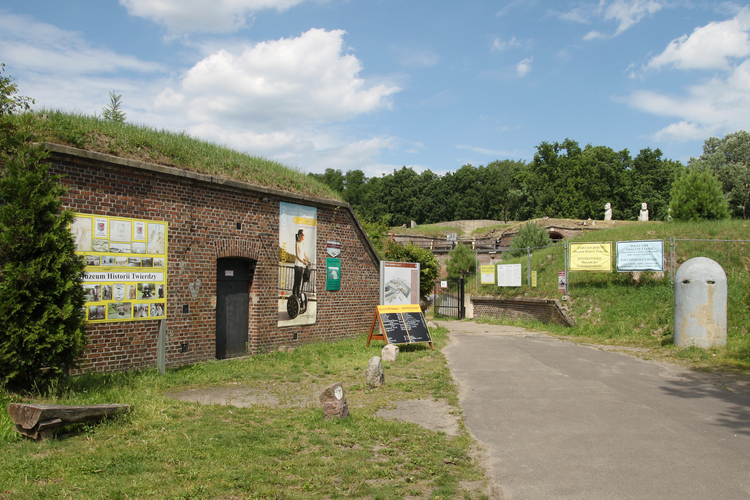 Fort Zachodni is located on the Uznam Island. It is situated near the seaside, by the mouth of the Świna River. It is one of two forts – along with Fort Anioła [the Angel’s Fort] – located on the Uznam Island. From the centre of Świnoujście, one needs to walk along Mieszka I Street or Wybrzeże Władysława IV Street, then turn into Jachtowa Street, which leads to the Fort Zachodni. On our way, we pass Park Zdrojowy [the Spa Park], Fort Anioła, and a yacht marina.

The fort is one of four forts of the Świnoujście Fortress. It was built in the years 1856-1861. Its task was to defend the port against enemy’s battleships. It was a one-storey redoubt built on a square-shaped plan. Several years later, it was reinforced with brick wings and surrounded by earthworks and a wet moat. After 1878, the seaside battery with an artillery deck and casemates was fortified. Later, the artillery redoubt was transformed into a redoubt fort; further artillery posts were designed. The next stage of the development of the fort was the emergence of machine guns and light mortars.

After the Great War, the fort was disarmed. It was armed again during the interwar period, when a battery of four 150 mm-calibre coast cannons. In 1941, a concrete command bunker was built in the western wing of the fort. After 1945, Russians built another three bunkers – in the middle of the fort and at the both ends of it. After the Second World War, the fort was used by the Soviet Navy. In 1962, it was handed over to the town, but the Russian units stationed in Świnoujście up to 1992.

An interesting fact is that the battleship “Schleswig-Holstein”, which on September 1st, 1939 cannonaded Westerplatte, starting the Second World War, set out from this fort.

In 2001, a group of enthusiasts from the “Reduta” Association rented the area of the fort, and after the revitalization in 2004, they opened the Museum of the History of the Świnoujście Fortress there.

The exhibition consists of a museum part and an open-air part. The museum part is divided into four thematic sections. The first one presents the Prussian times of the q9th and the 20th centuries. The second section shows the interwar period and the times of the Second World War. In the third part of the exhibition, visitors can see the period of the Cold War. The fourth section shows the history of the military port and exhibits of shipwrecks. The open-air exhibition presents cannons, floating mines, torpedoes, and rocket and depth charge launchers. The whole complex is surrounded by a wet moat and covers the area of about 2 ha.

The museum tour includes the museum hall and walk along a marked route around the entire fort. Visitors can see a guardroom, a fire control tower, vaults, and artillery stations. Organized groups are given a guided tour. The tour lasts about an hour. The tourists visiting the fort in summer have to remember about warm clothing because of low temperature in the building.

There are more similar attractions for the enthusiasts of weapons and history in Świnoujście, for up to this as many as three out of four forts built there in the 19th century have survived and are open to the public.