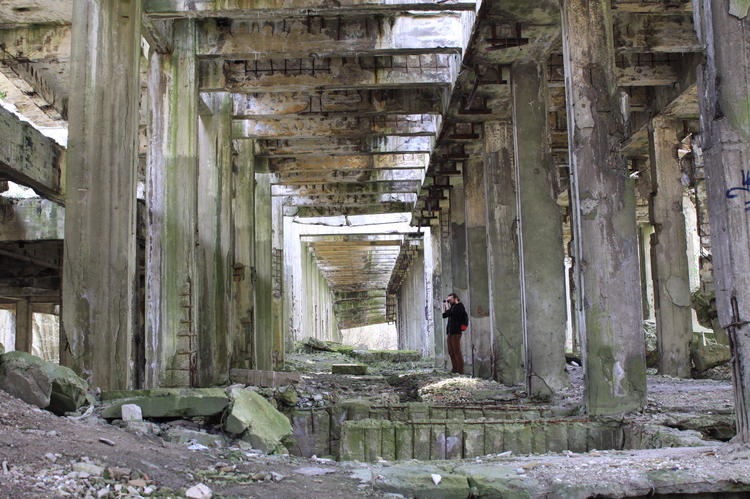 The ruins if the former factory of synthetic petrol – Hydrierwerke Pölitz covers the vast area located north of Tanowska, a part of regional road no. 114, approximately 18 km north of the centre of Szczecin. In order to arrive at the place, one has to turn in Licealna Street, by Gymnasium no 1, and then go on to Spółdzielcza, where bunkers are located, in which the “Skarb” Historical Museum, managed by the “Skarb” Association of the Police Region, has its seat.

The factory of synthetic petrol - Hydrierwerke Pölitz was established in 1938. Liquid fuel from coal (synthetic petrol) for the German army was produced there. In 1944, the factory covered the area of 1,500 hectares, including 200 hectares of dense technical infrastructure, from which several characteristic buildings have survived in various condition up to this day. The most recognizable structure is a coal elevator for storing semi-finished products and producing petrol. Also the framework of production halls can be seen. Ground anti-aircraft shelters and the Splitterschutzzelle single-person bunkers resembling an egg and the Westermann bunkers in a form of a cylinder ended with a pointed concrete layer have also been preserved. One may encounter complexes of silos for storing fuel too. Everything is hidden in dense groupings of trees and bushes. Some places are difficult to reach and dangerous. There are a lot of debris, rocks, and metal or cast iron fragments that stick out of the ground – that is why it is not advisable to walk among the ruins of the factory without assistance. On each Saturday, at 1:00 pm, there is a free-of-charge guided tour organized, during which it is possible to visit the factory, go underground, and see permanent exhibitions in the seat of the Association.

Geolocation
Search nearby
The Ruins Of A Former Factory Of Synthetic Petrol
COMMENTS
Sign in to leave a comment.