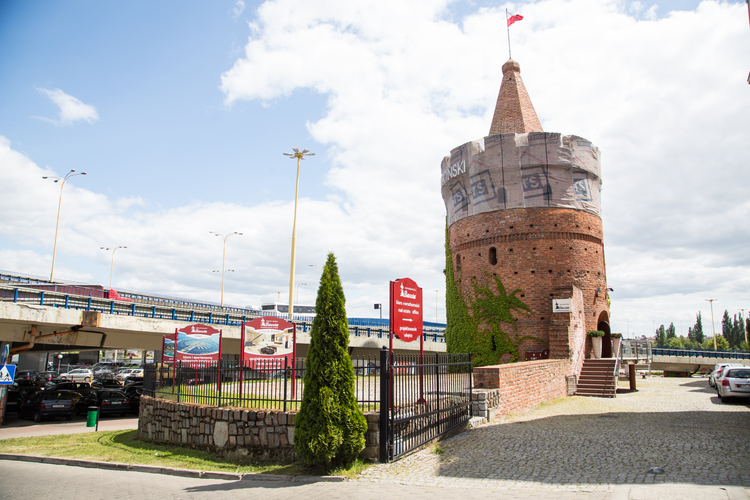 The Tower of Seven Cloaks is situated on Panieńska Street. In order to reach the street, it is best to use public transportation and arrive at Wyszyńskiego Street by bus 61, 62, 75, 76, 81, 87, A, B, C, D, or E, or by tram no. 2, 3, or 8. Then, we should make a turn in Księcia Mściwoja II Street that after 190 meters changes into Panieńska Street. 240 meters further, we reach the end of the street, where, on the right, the building is located.

Baszta Siedmiu Płaszczy, also known as Baszta Panieńska [the Maiden Tower], is the only preserved tower of the city fortifications. The tower was most probably erected prior to 1462 as a two-storey building. In the early 19th century, it was not demolished as other towers, but adjusted to serve as a utility building. After 1850, living quarters were built at the top of the tower, and the building became an outhouse of the building on 910 Frauenstraße. In such a form, the tower survived until 1944, when the Allies bombarded the town. The remaining ruins of buildings situated around the tower were pulled down in 1956, uncovering at the same time the tower’s walls. In the mid 1960s, the damaged parts of the tower were reconstructed.

There are two legends connected with Baszta Panieńska, which explain the name of the building. The first tells about a wealthy prince who had seven daughters. He wanted all of them to marry equally affluent men. Unfortunately, each daughter fell in love with a poor knight. Their father decided to teach his disobedient daughters a lesson and ordered to imprison them in a tower until they grow wiser. In opposition to this, the daughters had black cloaks made, which they wore day and night. Months and years passed, and one day someone noticed that food, which had been inserted through a gap in the wall, was not collected. The frightened prince ordered to crack the tower’s walls, and after it was done, it turned out that there is nobody inside - apart from hanging cloaks. Since then, the tower is known as the Tower of Seven Cloaks or the Maiden Tower. And what happened to the daughters of the wealthy prince that were so unhappily in love? No one knows it to this day.

The second legend tells about a court tailor of duke Bogusław X. The duke was going to set out for a pilgrimage to the Holy Land and ordered the tailor to prepare seven cloaks made of a very rare and expensive fabric. The tailor completed the task according to the command, but he cut these cloaks out so cleverly that he was left with several pieces of the fabric. The matter came to light when some day the duke paid attention to a woman walking down the street that wore a dress made of the same fabric like his cloaks. It quickly turned out that it was the tailor’s wife. As punishment, the dishonest artisan was locked in the tower, which since then has borne the names mentioned above.

Most likely, both legends do not tally with the true source of the tower’s name. According to historians, such a name comes from the guild of dressmakers that founded the construction of the building and that was supposed to defend it during a siege.

Baszta Siedmiu Płaszczy has been entered into the provincial register of historical monuments in June 1954.

More on the topic:
Geolocation
Search nearby
Baszta Siedmiu Płaszczy [The Tower Of Seven Cloaks]
COMMENTS
Sign in to leave a comment.