Eureka Exhibition
Eureka is an interactive exhibition during which technical and physical experiments can be performed. There are approx. 80 different exhibits from...
25-04-2015 ·
The Fisherman’s Monument
Darłowo
Home / Discover / Pomorze heritage / Historic Monuments 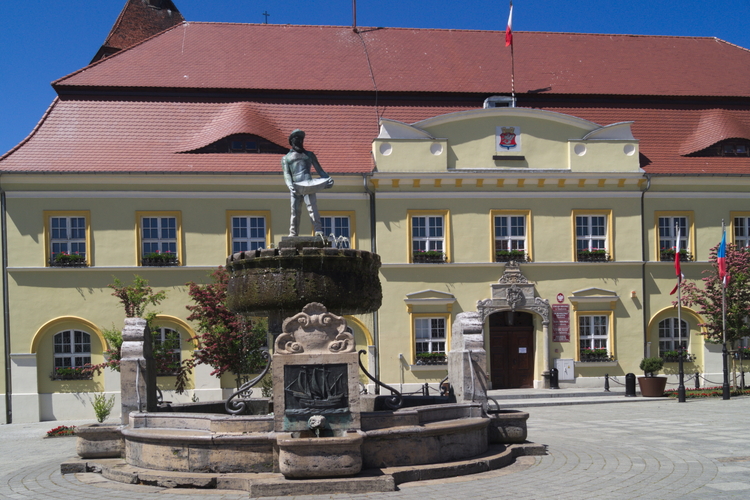 The monument is located in the centre of Darłowo, next to the town hall, on Kościuszki Square.

The Fisherman’s Monument has been standing at the central square of the town since 1919. One of the most affluent families in the town – the Heptenmacher family founded the monument. The Heptenmachers were proprietors of a large fleet of sailing ships and ships of burden. Therefore, they could afford to employ Wilhelm Gross – a well-known German artist – to make the monument. The monument is dedicated to seamen – the wealth of the town was closely connected with the Baltic for ages. The sculpture is at the same time a fountain. At the top of the pedestal, there is a fisherman who holds a ship’s hull in his hand and, from the height, casts a thoughtful glance at the inhabitants of the town. The pedestal, on which the fisherman stands, is decorated with four red bronze plaques presenting the life of the inhabitants of the town. In one of the plaques, there is a knight showing an area where the town was established. Next to him, there is a scribe and workers that are building a moat surrounding the town. The relief located from the north presents stevedores who are laboriously loading goods aboard a sailing ship. Another relief depicts a Hanseatic sailing ship. The fourth relief refers to comestibles produced by the inhabitants of Darłowo. The plaque presents a shepherd pasturing sheep and a woman grazing geese. Goose meat was one of one of goods successfully exported by the inhabitants of Darłowo. All these reflection-invoking pictures presents the most important events of the everyday life if the town. The monument-fountain was perfectly incorporated into the central square of the town and it is, undoubtedly, its significant ornament.