ŚWINOUJŚCIE ‘Basen Północny’ – The North Dock
This is the largest marina in Western Pomerania. It is a good shelter for those returning from the sea, and the harbour point for those who choose...
20-05-2015 ·
The Artesian well with a crowned frog
Home / Discover / Pomorze heritage / Historic Monuments 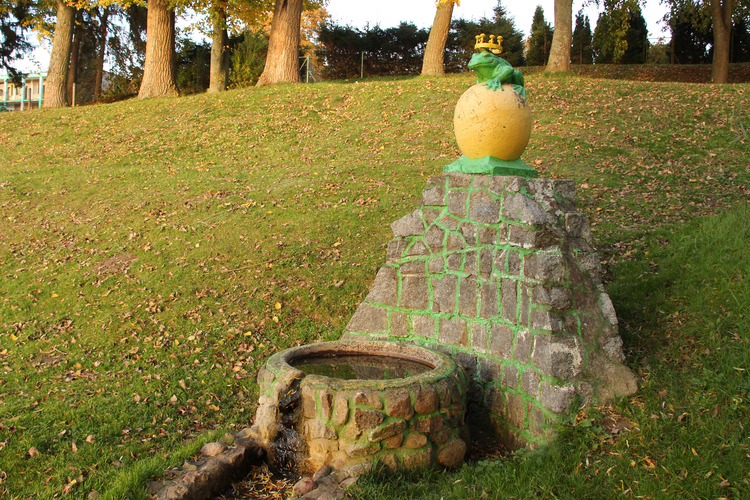 A monument of a crowned frog sculptured in stone sitting on the globe as the symbol of Golczewo decorates the Artesian well near Szczucze Lake. There are legends related to it. One of them says that the stone frog was transformed from a daughter of a local knight who fell in love with a baker's apprentice. The father caught them meeting by the lake and he cursed her with the following words: “May you always be a frog!”. At that moment a storm struck and when it stopped on the coast instead of the knight’s daughter there was a frog monument.

Another legend says that during one of the epidemics life of the residents of the village was rescued by a frog which showed them a source of pure drinkable water.

The monument was built in 1910 and the author of the project was an architect Otto Walter, a son of the pastor from Golczewo. The frog was sculptured by a sculptor from Berlin. It was initially placed near the former castle at the intersection where there was a small source of water. In 1974 during the reconstruction of the road the well was demolished and during the works a bottle with a document informing about the idea of constructing the monument was found under the well. The monument was moved to its current location over the Artesian well where it is a tourist curiosity willingly visited by tourists and a characteristic spot of Golczewo.

More on the topic:
Geolocation
Search nearby
The Artesian well with a crowned frog
COMMENTS
Sign in to leave a comment.