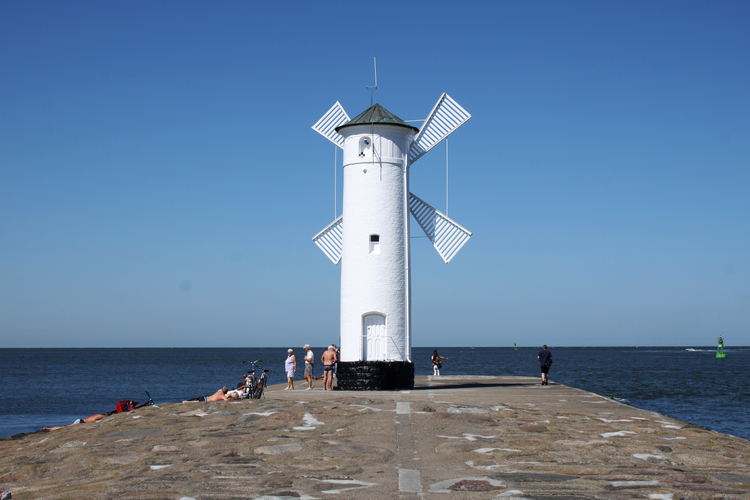 The Młyny sector light in Świnoujście is located in the northern part of the town, at the end of the Western Breakwater, which is situated on the left (western) bank of the Świna River, flowing into the Baltic Sea in this place.

A sector light is a navigational beacon guiding ships to the waterway that leads along the bed of the Świna River. It was established in the years 1873-1874 as a part of the waterway modernization project. The designer of the sector light was a chief architect by the name of Severin, who gave it a characteristic shape of a windmill. The building is 10 metres tall and is painted white. The sector light is still used. From the side of the sea, there is a pulsating light that shows sailors the right way to the port at night. Thanks to its undying popularity, the sector light became a part of the official logo of Świnoujście, so it can be seen on postcards or the covers of tourist guidebooks and brochures.

There is a legend connected with the sector light. In the old days, the mariners from Świnoujście went back home from long voyages exhausted and aged. Alicja, a wife of a mariner, was so desperate when she saw how her beloved Krzysztof looked like that she went to the sea shore at night and started to weep. Then she heard a voice that told her to go to the nearby windmill. An old miller lived there and he told Alicja to go back with her husband next day. When they returned, the miller covered Krzysztof with mud, told him to take baths in the sea and stroll. When a week passed, the miller took him to the windmill, and the husband of Alicja came out rejuvenated. The windmill soon started to be visited by other seamen. After the death of the miller, it turned out that nobody knows the secret of his treatment, and the mechanism of the windmill stopped. In spite of this, people who want to be rejuvenated come to Świnoujście to bury themselves in mud, take a swim, and stroll.