Turkusowe Lake
Turkusowe Lake was formed on the site of a former chalk pit. A Portland cement factory, founded by Johannes Quistorp in 1829, operated in the nearb...
09-04-2015 ·

Urban fortifications
The walls were constructed at the turn of the thirteenth and fourteenth century pursuant to a decision of 1286, and survived to this day. On the ou...
29-04-2015 · 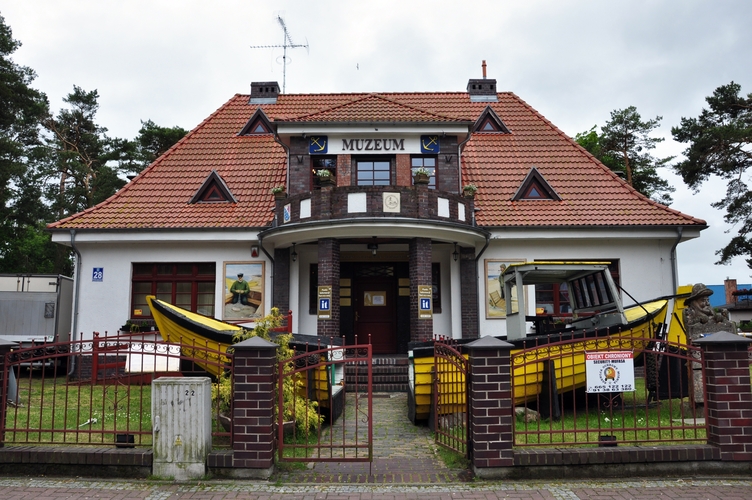 The Sea Fishing Museum is situated at the corner of Śląska Street and Bursztynowa Street - the main street in Niechorze, combining this summer resort with the neighbouring village of Pogorzelica. The museum is housed in an interesting building from the 1930s called 'the American's villa'. The unique name of the building comes from the way of making money by one of its former owners. Namely, he regularly went to the USA to 'work', wherefrom he often brought new cars.

The Sea Fishing Museum started its activities in summer 1994. The idea of ​​the establishment of such an institution came from Henry Gmyrek, a fisherman from Niechorze. The museum has a collection both own and acquired from other entities, including the National Museum in Szczecin, the Maritime Office in Szczecin and from residents of neighbouring towns.

The facility hosts permanent and temporary exhibitions depicting the specificities of a boat fisherman's occupation, and dealing with the issues regarding the Polish coast. The museum has 3 exhibition rooms, where You can see, among other things, iron anchors, fish pots, wrought iron goads, a variety of hooks, nets, baskets for transporting fish, or keeping nets to store them popularly called 'the bogs' by locals. There are exhibits embedded in the in the area surrounding the museum such as wooden fishing boats that are a gift from local fishermen.

The Museum offers lessons and historical lectures for groups, but this is subject to prior agreement.

'The American's Villa' is not only a museum, but is also the local Community Centre and the Tourist Information Centre. Periodical cultural meetings that bring together the local community are held there. These include 'Cultural Thursdays' and 'People and their passions'. This is where a well-known festival called ' the Festival of Baltic Herring', which widely promote our 'sea silver' takes place. Tourists can learn there about curiosities of the coastal villages of the commune of Rewal, get folders promoting a given region, and have a guided tour around the countryside or most interesting places of Zachodniopomorskie [West Pomerania] Province.