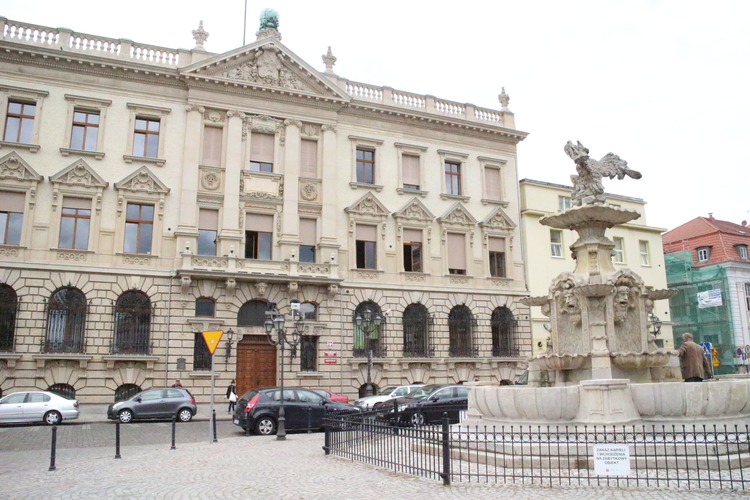 Palac pod Globusem [The Palace under the Globe] is located in Szczecin, at Orła Białego Square, close to another historic building of the Music School Complex, the Orła Białego Fountain and the statue of Flora. The bus no. 76 stops nearby (Grodzka Street), and the trams no. 1, 2, 3, 8, 10, 12 stop at Żołnierza Polskiego Square. Cars can be parked at the Academy of Arts (the red zone).

The Palace under the Globe was being built in the years 1724-1725. It was designed by Peter de Montarque, who came from the Languedoc in France. His collaborator was Philip Gerlach, who was the architect and creator of numerous churches in Potsdam and Berlin. Decorations were made, in turn, by Johann Georg Gluma (an artist at a royal court). The building was made in the Baroque style. Materials used for its creation were stone and brick. The current form is not the original construction, as it dates back from 1890. It is the work of Franz Wichards. Its most prominent feature is an interesting projection divided by four pilasters, at the finial of which there is a tympanum with a globe (emerald - coloured) on its top and based on two lions. The globe is the element clearly standing out from the beige facade. The name of the palace is derived from that element. Rustication and cladding of the facade also draws attention. The palace used to be the headquarters of Philip Otto von Grumbkow (Supreme President of the Pomeranian Province). The palace is known primarily from the fact that princess Sophie Dorothea of Württemberg was born there, who became the Tsarina of Russia by marrying the Tsar Paul II (son of Catherine II, also born in Szczecin). The building was once the seat of the insurance company "National". Currently, it is in the Academy of Arts. At the end of November 2014, renovation works were completed, which included, among others, refurbishing facades as well as reconstructing the ornate ceiling in the Rectorial Gallery. The total cost of renovation of the building amounted to PLN 19 million, and its completion was possible, among others, thanks to the EU funds obtained for this purpose. The money was also used to equip the Academy of Arts with the enlarged media library, theatre and presentation room, a winter garden being also a reading room, and art studios. The end of renovation works was celebrated publicly with the performances of, among others, the Academy students presenting their skills in various artistic forms. People present at the show could go inside to see the new decor of the Academy. Orła Białego Square] is a very representative place, and hikes organised by local guides often set off from the university building.

: The Flora’s Monument
Search nearby
Pałac pod Globusem [The Palace under the Globe]
COMMENTS
Sign in to leave a comment.