SZCZECIN AZS Yacht Club
This is one of the few clubs in the harbour area and it has been in operation for almost seventy years. If you can sense the atmosphere of the old...
20-04-2015 ·

The bathing beach
In the summertime, the bathing beach in Mielno, along with the basin limited with yellow and red buoys, is guarded by lifeguards of WOPR. The yello...
05-02-2015 ·

DZIWNÓW The Yachting Marina
Architecturally, this will be a very interesting marina. The marina will be constructed between the fishing port and the drawbridge, and the entran...
23-04-2015 ·

The Main Post Office
It is the most beautiful neo-Gothic building in Koszalin. Various sources frequently describe its historic architecture as eclectic, which is quite...
23-04-2015 ·

The California incense cedar
This tree can grow up to 60 m high, but this happens very rarely. Typically, commonly found specimens measure up to 30 metres. The treetop is very...
12-01-2015 ·

Eastern Darłówko Bathing Area
Darłowo can be proud of a beautiful and large beach. The beach is divided by the Wieprza River, therefore we can say that there are two beaches in...
11-10-2015 ·

The Polish Arms Museum
The centre is within the paid parking zone and the network of one-way streets. Getting to the area of ​​interest by E. Gierczak Street is only poss...
29-04-2015 · 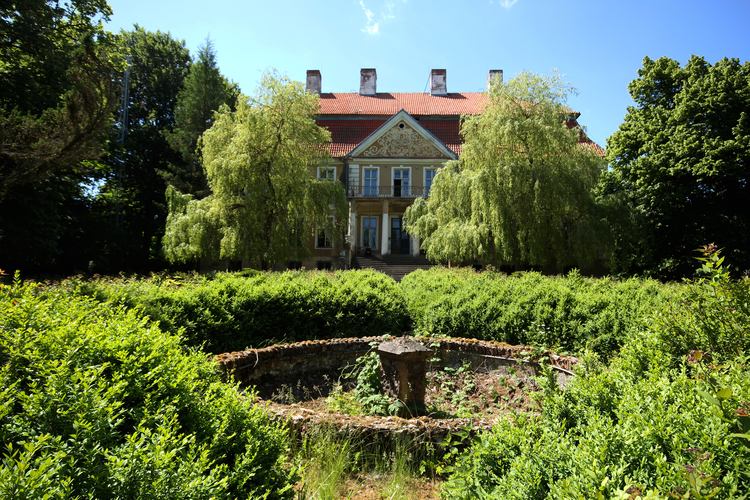 The Palace in Stolec is situated inside the town by Stolsko Lake, near the national border, approx. 26 km north-west from the centre of Szczecin and approx. 13 km north from Dobra. You can get there by bus (from Szczecin) no. 122 and 123. There is a red cycling trail “Szlak Puszcza Wkrzańska” [Wkrzańska Primeval Forest Trail].

The Palace in Stolec is situated near the border with Germany, near the lake and it is one of the most beautiful places of this sort in the Police County. It was built between 1721 and 1727 in the Classicising Baroque style. There is a chestnut alley leading to the main entrance of the residence. To enter the palace complex you go through a monumental richly decorated, neo-baroque wrought-iron gate, which is embedded in two concrete pillars on which on both sides there are deer sculptures. The wings of the gate are decorated with floral motifs and initials of the last owner from the von Ramin family. The fencing is not complete and unfortunately it still undergoes degradation. The alley leading to the building finishes at the driveway decorated with an oval lawn. There is also a yard. This place is separated with a small fencing which makes it impossible to further sightsee the complex independently, however those who are interested in what is on the other side of the castle continue their explorations. On the western part of the palace there is a linden alley, and behind it – there are forests, meadows and a lake which constitutes a part of a naturalistic park from the 19th century, which is falling into ruin more and more. There are decorative stairs leading to this place from the palace. The founders of the palace and park complex were representatives of a wealthy family von Ramin. This brick building was built on the plan of a rectangle. It has two floors and it is covered with a mansard roof. There are representative stairs leading to the building, and by the entrance there are four columns supporting the balcony above. In the central part of the façade there is a triangle pediment with a tympanum presenting a crest of the von Ramin family. Interestingly, after the 2nd World War the national border was marked through the land, which is symbolized by border posts at the driveway. In 1945 the palace was taken over by the Border Troops, and then Border Guards stayed there. In the 70’s of the 20th century the complex was completely renovated. When the Border Guards left the property at the beginning of the 21st century the palace remained in the hands of the Treasury, under the supervision of the Police Prefect. In 2009 the property was given to the University of Szczecin, which unfortunately gave it back to the County Governor's Office in Police. Currently (February 2014) there has been a tender announced regarding the sale of the palace and park complex in Stolec, the total surface area of which is 13.33 ha.

More on the topic:
Geolocation
Search nearby
The Palace in Stolec
COMMENTS
Sign in to leave a comment.