The parish church of the Blessed Virgin Mary Queen of the World
The church was erected in several stages from the end of the thirteenth century to the fifteenth century. It was rebuilt several times at that time...
07-04-2015 ·
The Palace in Karszyn
Home / Discover / Pomorze heritage / Palaces and manor houses 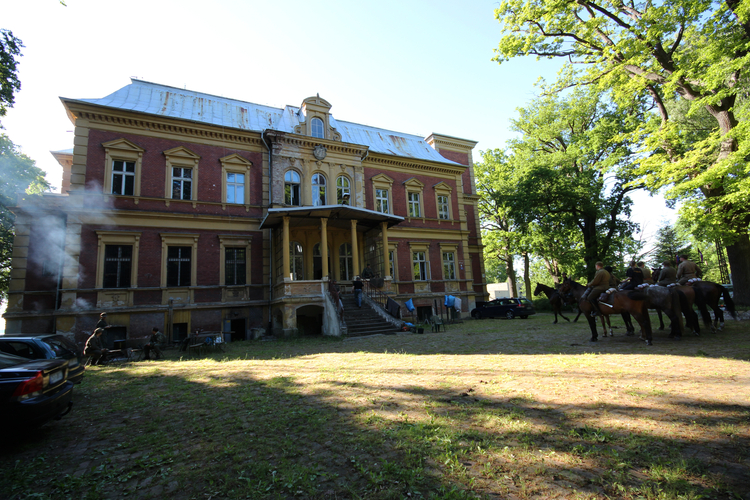 The Palace in Karszyn is situated on the coast of Nowowarpieńskie Lake, among the forests of Wkrzańska Primeval Forest, at the exit from province road no. 114, approx. 3.5 km south-east from the centre of Nowe Warpno and approx. 40 km north-west from the centre of Szczecin. The private carrier Ever-Trans ensures the connection between Nowe Warpno and Karszyn with Police.

The Palace in Karszyn is situated near the historic half-timbered church of St. Hubert, in quiet and picturesque surroundings. You cannot see the building from the province road even though it is only 300 m from it. The building was built in the French Neorenaissance style at the end of the 19th century by the von Enckevorth family, the owners of the property in Karszyn. After the 2nd World War the nearby property together with the palace was nationalized. In the 70’s of the 20th century the palace was generally renovated, transformed and assigned to function as a facility of the Border Troops. In the period after the political transformation, after 1989 the facilities were manager by the Pomeranian Department of Border Guard in Szczecin. Currently the palace is managed by the Stanisław Staszic’s Pomeranian Library in Szczecin, which has their storage library there. The facilities constitute a place for cultural meetings, conferences, exhibitions and outside events. Around the residence there is a beautiful historic park. Considering the shape of the building itself, it is a two story building with an attic covered with galvanized sheet metal mansard roof and with dormer windows providing light to the attic. The building has a basement. You enter the building through a porch, to which several stairs lead. The palace is made of red brick. In the posterior façade there are two side risalits: next to the northern side elevation – there is a square three-storey tower, and next to the southern elevation – there is a single-story semi-circular outhouse. In the 70’s of the 20th century the building was renovated inside and it lost its initial nature. Wooden stairs were replaced with reinforced concrete stairs. The majority of windows and doors were replaced. It is worth highlighting that in the palace the original equipment was not preserved.

More on the topic:
Geolocation
Search nearby
The Palace in Karszyn
COMMENTS
Sign in to leave a comment.