The Polish Arms Museum
The centre is within the paid parking zone and the network of one-way streets. Getting to the area of ​​interest by E. Gierczak Street is only poss...
04-07-2015 ·
The palace in Karwice
Home / Discover / Pomorze heritage / Palaces and manor houses 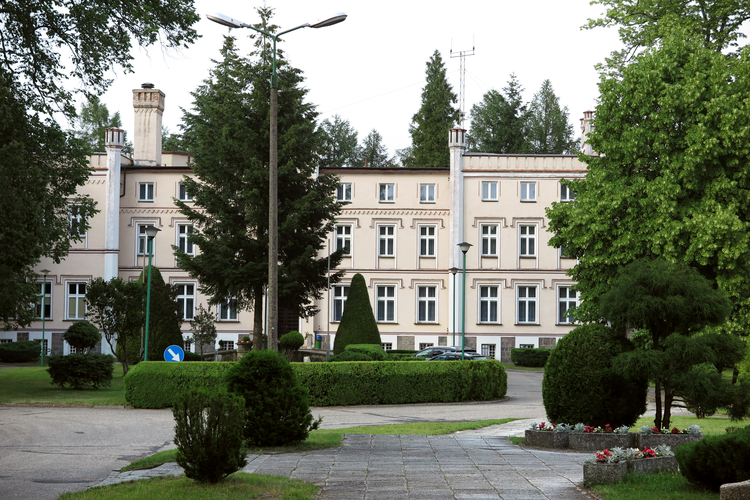 The palace is situated in the village of Karwice, on the coast of Lubie Lake, around 10 km south of Drawsko Pomorskie. To reach the palace you have to take provincial road no. 175 in Drawsko Pomorskie, drive towards Kalisz Pomorski, and about 2.5 km beyond the village of Mielenko Pomorskie turn left to the local road and drive another 4 km (at the entry to this road, there is an information board saying that this is an area of a military training ground. There is no need to worry, as the road is open to all vehicles and you will be able to reach Karwice without problems). There are two bike trails on the verge of the village: a red one called ‘Dookoła jeziora Lubie’ [Around Lubie Lake] and an orange one called ‘Ścieżki przyrodnicze’ [Nature Trails]. You can also reach Karwice by taking a nature trail which starts by the ‘Dzikowo’ forester’s lodge and ends in the park by the palace in Karwice.

The palace in Karwice is one of the best preserved monuments of residential architecture in the Drawsko Pomorskie Commune. The building was erected in the first half of the nineteenth century by the family of von Brockhausen. At the end of the nineteenth century the village along with the palace were taken over by von Lepel family, and in the 1920s Friedrich Volkmann became the owner. The present-day appearance of the palace is a result of the conversion made in 1865-66 and the expansion of 1971. It is a three-storey neo-Gothic (Victorian) landowner residence, rectangular in plan, with two avant-corpses and a tower, and rich architectural details. Until recently, the palace was open to tourists and housed a Military Training and Holiday Centre, open to both military personnel and regular visitors. Currently the building is used for military purposes only, and unfortunately cannot be accessed by tourists. The building and its surroundings may be viewed from the outside.  An interesting fact associated with the building is that in 1994 the then President of the Republic of Poland, Lech Wałęsa, attended a dinner in the company of highest ranking representatives of the Polish Armed Forces which took place in the palace and went down in history of Polish Third Republic as the ‘dinner of Drawsko’. The President’s consultation with the generals led to the resignation of the Minister of National Defence. In truth, the dinner took place in the neighbouring military canteen, and not inside the palace, but the history of the ‘dinner of Drawsko’ was permanently linked to the palace in Karwice. The palace has comfortable hotel rooms, a ballroom and conference halls. The palace has a picturesque location on the high coast of Lubie Lake. It is surrounded by a large and interesting landscape park with exotic tree species. Both the palace and the park are listed in the register of objects of cultural heritage. At the foot of the scarp there is a beach with piers and a storehouse for water sports equipment. In the north west of the park there is a tomb of the last owner of the palace, Richard Volkmann, who died in 1942. The park is the finishing line of the 4 km-long nature trail Dzikowo – Karwice.

More on the topic:
Geolocation
Search nearby
The palace in Karwice
COMMENTS
Sign in to leave a comment.