ŚWINOUJŚCIE ‘Basen Północny’ – The North Dock
This is the largest marina in Western Pomerania. It is a good shelter for those returning from the sea, and the harbour point for those who choose...
20-05-2015 ·
The Brewery in Połczyn Zdrój
Połczyn Zdrój
Home / Discover / Pomorze heritage / Technology and engineering monuments 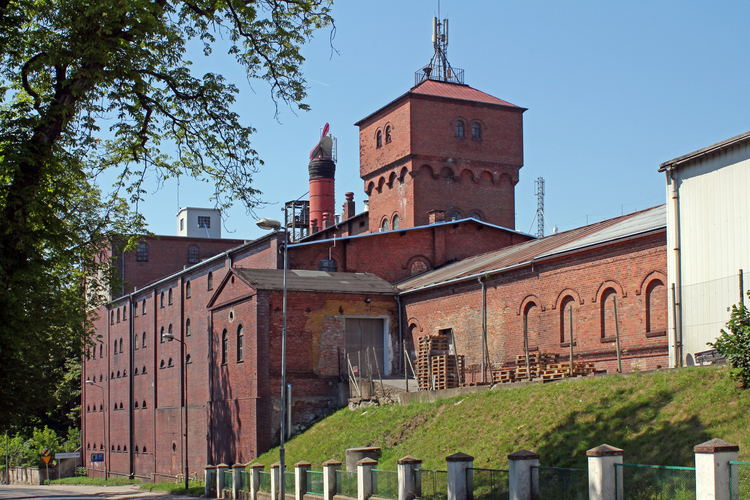 The Brewery in Połczyn Zdrój is located on a hill at the main road leading from Białogard to Złocieniec, at Piwna Street.

The Brewery in Połczyn Zdrój was founded in 1825 by Herman Fuhrmann. It is one of the oldest of its kind in Poland. What is left after the management of the facility by its founder is simple flat street leading to the brewery. The alley was created when Karl Fuhrmann ordered to dig the hill to prevent the trucks from slipping down the slope in winter. Besides, thanks to the owner of the brewery, the residents of Połczyn Zdrój had tap water. When they were building the aqueduct in the late nineteenth century, the owner of the brewery gave consent to supply houses with water from the intake belonging to the plant. In the years 1865-1945, the brewery was one of the biggest ones in Western Pomerania. After the war, it was nationalised like other plants, and the Fuhrmanns left for Germany. The brewery building is huge, covered with clinker bricks and coming from the twentieth century. Unfortunately, the post-war period was not favourable for the brewery. The plant was unlucky in the hands of subsequent owners. In the 1990s, a branch of the Koszalin brewery was there. Then, Brok beer was produced there. In 2002-2005 the brewery in Połczyn Zdrój was taken over by Browary Polskie Brok-Strzelec S.A., a brewing group, which stopped the production of beer in 2003 due to financial problems. In 2003-2007, there was Sagittarius-Strzelec S.A. in the brewery, which started the production of soft drinks and mineral water. Then, in place of the brewery, Spring Water Production Plant Połczyn Zdrój was established. In 2007, the plant was leased by the company Brewer Poland Sp. z o.o., which is owned by Brewer s.r.o., a Czech company. The brewery resumed the production of beer under the name of the Połczyn Zdrój Brewery. In 2008, the company bought a majority stake of Wytwórnia Wody Źródlanej Połczyn Zdrój S.A. and changed its business name to Fuhrmann Sp. z o.o. With the change of the owner, the plant changed its business name to Browar Fuhrmann. At that time, beer for retail chains, other clients and for export accounted for a large part of production. Unfortunately, the company Fuhrmann Sp. z o.o. declared arrangement bankruptcy in 2010. The situation changed at the end of 2010 when the trust fund, which had been the lender up to then, became the owner of the company. It was a very successful move. The brewery sold more than 100 000 hectolitres of beer in 2011 and  production was doubled in 2012. A 25% increase in sales was recorder and progress persists. At the heyday of the brewery, it employed 120 people and produced 350 000 hectolitres of beer per year. The brewery building is historic, but modern technologies and solutions have been implemented inside. The fact remains that beer is brewed by old recipes. The brewery can be seen only from the outside.

: The Old Town
Search nearby
The Brewery in Połczyn Zdrój
COMMENTS
Sign in to leave a comment.