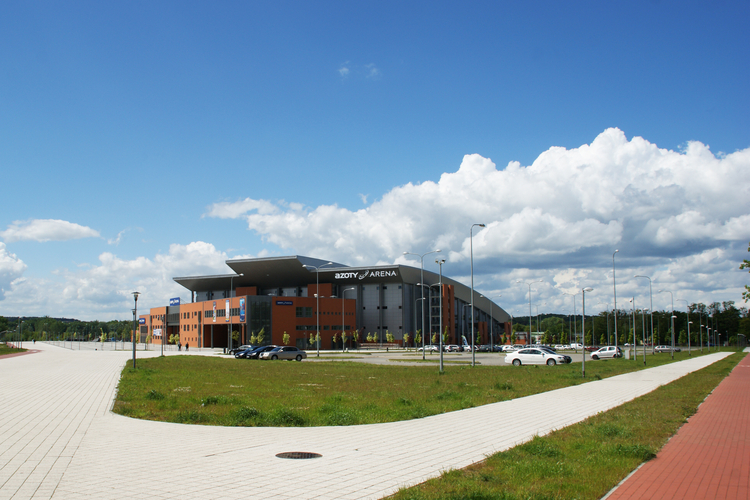 Azoty Arena Sports and Entertainment Hall is situated at Szafera Street near Zawadzkiego-Kolonowica residential estate. The Municipal Athletic Stadium and the Zbysław Zając’s Cycling Track are located at a distance of a few hundred meters. You can get there with public transport: by bus no. 75 (Szafera or Zawadzkiego stops), 53 and 80 (Zawadzkiego stop), as well as by tram no. 1 and 9 (Spacerowa stop). If you get here by tram, you need to walk up along Szafera Street a few hundred meters. You can get there by car from the centre driving along Krzywoustego, 26 Kwietnia, Taczaka, Sosabowskiego and Szeroka Streets and then turn right into Szafera Street. There is a parking place for approx. 600 vehicles next to the hall.

The decision about building a modern sports and entertainment hall in Szczecin was made in 2006. Before there were wastelands with wild vegetation, while other parts of the land were taken by sheet metal garages and the Szafera market. The first stage of the works involved cleaning and levelling the ground, while the construction works started in 2011. The works took 8 years and it costed 140 mln PLN. The hall is intended for games, concerts and other sports and cultural events. It is the most modern structure of this sort in the Zachodniopomorskie Province. The usable area is 25 502 m2, while the capacity of the bleachers is 5027 seats. Inside there are conference rooms for 450 people, VIP lodges and a restaurant. The area surrounding the hall is a recreation zone, where apart from the parking, pavements and lawns there are plans to open a skate park. The team of Chemik Police plays their games in the hall within the Volleyball Champions League. It is also used by basketball clubs, such as King Wilki Morskie Szczecin or futsal Pogoń 04. World Junior Championships and World Cadet Championships in Karate took place in the hall, as well.

More info: www.azotyarena.pl
More on the topic:
Geolocation
Search nearby
Azoty Arena Sports and Entertainment Hall
COMMENTS
Sign in to leave a comment.