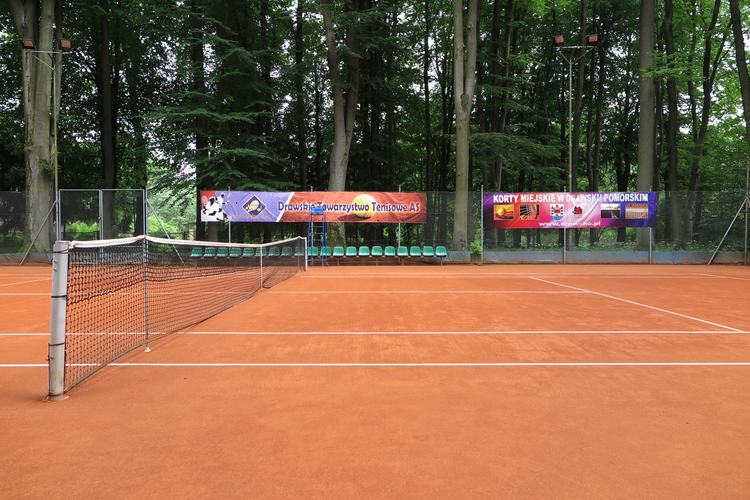 The courts are situated in the Fryderyk Chopin urban park in Drawsko Pomorskie. You can reach it by car from Gajowa Street or on foot from Seminaryjna Street or by crossing one of the bridges across the Drawa (for pedestrians only) from Obr. Westerplatte, Polna and Staszica Streets.

The municipal courts in Drawsko Pomorskie are situated within the area of the urban park, and they are surrounded by beautiful scenery. Tall trees with broad crowns make shadows during hot summer days and protect against the wind, while the green shrubs provide a nice background for a match of tennis. The vicinity of the Drawa River makes the location of the courts even more attractive. The courts were built in the 1930s and function to this day. The last extensive modernization of the facility took place in 2004. Currently the facility has two courts with clay surface and a tennis masonry practice wall. The courts are 23.77 m long and  8.23 m wide (singles match) or 10.97 m (doubles match). The facility is illuminated which enables matches to be played after dark. The courts feature PVC lines that indicate the area of the court, the place for players and supporters. The facility is fenced and the tall fencing features tarpaulin in contrasting colours which increases the visibility of the ball during the game. Moreover, there is a light container building which houses a changing room, storage room and toilets. The courts are available to everyone. They are managed by the ‘AS’ Tennis Association of Drawsko. In the vicinity there is ‘Słoneczna’ café, a car park and tables and benches under wooden roofing.

: Multipurpose sports field
Search nearby
Municipal tennis courts in the Chopin Park
COMMENTS
Sign in to leave a comment.