Ratusz [the Town Hall]
Being both a historic and current seat of the City Council, it is the second biggest and most spectacular monument, right after the basilica, in Kołob...
09-06-2021 ·

Świna’s Delta
Świna’s Delta is an area of special bird protection, therefore its priority is protecting birds and providing the best possible conditions for breedin...
09-06-2021 ·

The fragments of city and cathedral fortifications
The construction of the system of defensive walls surrounding Kamień Pomorski was began in the first half of the 14th century after the attack of the...
09-06-2021 ·

The municipal stadium
The Świdwin Municipal Stadium is the main venue for most sports events in the town. The building consists of a grassy pitch, side pitch, tennis courts...
09-06-2021 ·

The Stanisław Staszic Pomeranian Book Collection
The Book Collection was established in 1905. It owes its development to Dr. Erwin Ackernecht, who merged collections from all over Western Pomerani...
23-04-2015 ·

The Stadium
The Karlin stadium is a multipurpose sports venue. There is a grass football pitch to play football, tartan volleyball pitch, multifunctional tarta...
25-04-2015 · 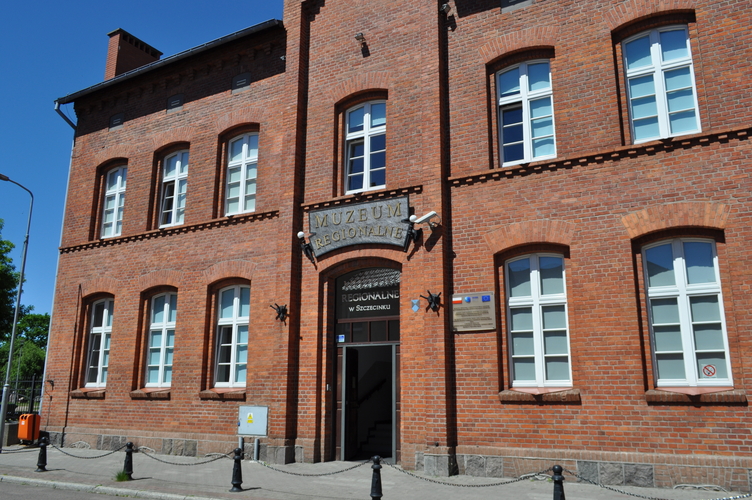 The museum is located at Szkolna Street in Szczecinek not far from the city centre, Wolności Square and near the Duke Warcisław I School Complex No. 2.

The museum was moved a few years ago from Bohaterów Warszawy (St Nicholas's Tower). Therefore, older editions of guidebooks can be misleading, as an outdated address may still be there.

Guests traveling by cars are welcomed to use a large free car park located at Jana Pawła II Street. The car park is also suitable for coach tours.

The Regional Museum in Szczecinek is one of the oldest museums in the Western Pomerania. It was established in 1914 with its seat in St Nicholas's Tower, and was later moved to the building at 1 Szkolna Street in Szczecinek. It has archaeological collections, the ones regarding the history of the town and the region , hunting ones, goldware collections, collections of old silverware and a model of the Szczecinek garrison. You can find there, among other things, the priceless Lubinus's map, which was the first great work of cartography. While preparing a map of the Duchy of Warsaw, Lubinus meticulously marked the towns, even the then Szczecinek, an important city in terms of economic and military position, did not escape his notice. In the museum You can also admire temporary exhibitions on varied subjects, including exhibitions of sculpture and painting. At the museum there is a reading room and a library, where You can expand your knowledge about the history of the Szczecinek Land from the Middle Ages to the present day. There is also a souvenir shop with small souvenirs, guidebooks, maps, etc.), and a toilet. In the museum You can also buy a lesson with a guide who takes visitors on a historical journey through the museum. The service can be purchased on site or by prior appointment. Groups are recommended to call beforehand.

The exhibition presents the works and cultural artefacts related to everyday life of Pomeranian nobility: the Golzs of Siemczyno, Herzbergs of Lotynia, Podewilses of Krąg. In this room You can see, among other things, the noble living-room equipment - furniture from Gdańsk. The final exhibits are the maps of Pomerania, including the 'Lubinus's' map.

The military collection presented at the exhibition contains almost everything from the equipment of the soldiers from different armies having stationed in and around Szczecinek that was collected in recent years. The objects related to the history of World War II have added to the collection. At the centre of the exhibition there is a large model depicting the Battle of Szczecinek on 27 the February 1945 and capturing the city by the Red Army - the units of the 32nd Guard Cavalry Division under the command of General J. P. Kałużny.

The hunting room has the exhibits initially dedicated to the concept of the Museum of Forest Culture. The most interesting objects include antique hunting guns, firearms and white weapons, hunting equipment. One of the rifles has the trigger mechanism designed by Leonardo Da Vinci. This collection numbers over 100 objects.

Old silverware is an exhibition of over one hundred objects from the eighteenth to the early twentieth century made in eminent European goldsmith workshops of, among others, Warsaw, Vilnius, Moscow, Berlin, Poznań, Wrocław, Vienna, Paris and others. The exhibition presents the objects that could be found in aristocratic and noble mansions like tableware, toiletries, personal objects. A collection of sacred art is also impressive. The objects were made for the needs of the liturgy of the Catholic, Protestant, Orthodox Church, and for Jewish liturgy.