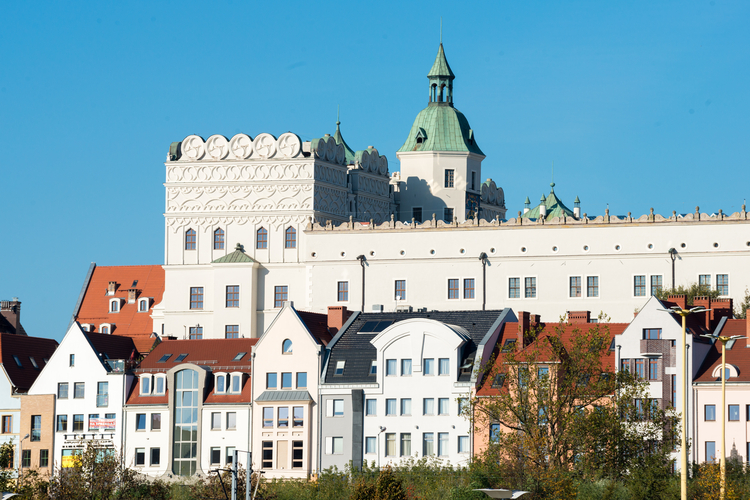 The Opera House at the Castle is temporarily (for renovation) in a hall at Energetyków Street. You can get there by public transport, by bus (the Energetyków stop) or on foot from Wyszyśki Street and across Most Długi [the Long Bridge].

The Opera House at the Castle was founded as the Szczecin Operetta of the Society of Friends of Musical Theatre. It has been operating since 1978 in the current seat at the Castle of Pomeranian Dukes in Szczecin. This is one of the most important music stages of the city.

The repertoire is diverse, including not only opera, but also ballet, operetta and musical. Alongside classics, there are also modern performances. Interestingly, this is the only Polish opera house which has all operas of outstanding artist Stanisław Moniuszko in its repertoire. The Szczecin opera house has a rich offer for children: Family and school performances and the workshops called Roztańczony OPERAnek.

The opera house also organises regular events, which permanently etched into the cultural calendar of the city. There is an annual Great Tenors Tournament held in the courtyard of the Castle of Pomeranian Dukes, with eminent singers from around the world. Also in the outdoors and also every year, a concert called 'To those who did not return from the sea ...' takes place.

The website of the opera house contains a full price list of tickets for all performances. You can purchase tickets online, but only adult ones.

Currently, the Opera House at the Castle is being thoroughly rebuilt. However, in order not to interrupt business, performances have been held since 2012 in the temporary opera hall house at Energetyków Street.

More info: www.opera.szczecin.pl
More on the topic:
Geolocation
Search nearby
The Opera House at the Castle
COMMENTS
Sign in to leave a comment.