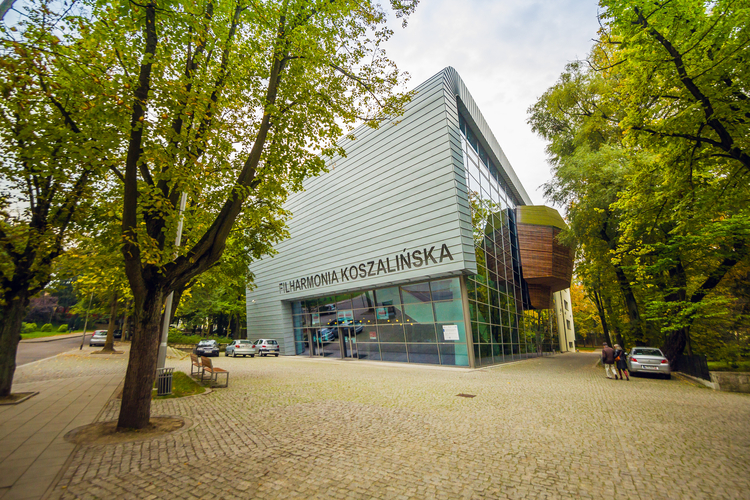 Filharmonia Koszalińska im. Stanisława Moniuszki [the Stanisław Moniuszko Koszalin Philharmonic] in Koszalin is located in Park Książąt Pomorskich [the Park of Pomeranian Dukes], near the amphitheatre and Centrum Kultury 105 [the 105 Cultural Centre]. The building can be reached from Zwycięstwa Street by turning towards the park opposite the post office into Piastowska Street; or from Młyńska Street by turning also towards the park at Henryki Rodkiewicz Roundabout into Piastowska Street.

The Stanisław Moniuszko Koszalin Philharmonic in Koszalin has had a newly built premises since 2013. It is a magnificent modern building with steel and glass façades. Two walls, almost completely glazed, give the impression as if they were studded with gigantic ambers. Both the builders and music lovers emphasise the unique acoustic qualities of the new concert hall.

The Stanisław Moniuszko Koszalin Philharmonic is one of the two cultural institutions of its kind in the province. It was erected in 1956 to promote, present and protect Polish and foreign classical music, both orchestral and chamber one.

Half of the performances organised by the philharmonic are symphony concerts. There are approx. 120 concerts annually for approx. 60 thousand listeners. Away concerts are also held regularly in the region. The philharmonic orchestra also performs in the halls of Europe; mostly in Germany in the past, including the Berlin Konzerthaus.

The philharmonic hall hosts many famous Polish conductors and soloists, and also Polish and foreign pianists, the winners of the Chopin Competition, have presented their talents here.

the International Organ Festival, the largest of its kind in Poland, has been organised annually since 1966 in the month of July and August, and with the support of the authorities of Koszalin and the Minister of Culture and National Heritage. Most of the 35 concerts are performed in the Koszalin cathedral.

Open-air opera performances for nearly 5 thousand listeners, prepared by the philharmonic hall and presented in the amphitheatre, have become the tradition of the summer season.

During the Carnival, the Philharmonic includes concerts featuring performers from the circle of popular, film and jazz music, as well as operettas in its repertoire.

Music performed by the symphony orchestra of the Koszalin Philharmonic can be admired while listening to CDs. The artists have recorded 13 of them so far.

More info: www.filharmoniakoszalinska.pl
More on the topic:
Geolocation
Search nearby
the Stanisław Moniuszko Koszalin Philharmonic
COMMENTS
Sign in to leave a comment.