The Town Hall
The Town Hall in Wałcz is located in the historical town centre in the western side of the market square. The oldest part of Wałcz has a preserved...
26-04-2015 ·
The Most Sacred Heart of Jesus church
Home / Plan your trip / Practical information / Places of religious cult / The Roman Catholic Church 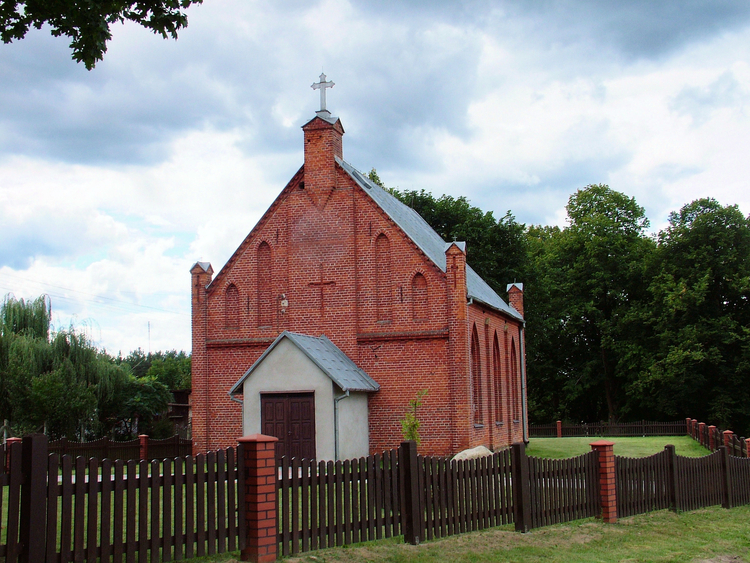 The church is situated in the centre of the village, within a green area surrounded with a low fence, among old-growth trees. It can be easily noticed from the access road.

The first, wooden church in Przelewice existed at least in the 16th century. There are no records concerning the date of the construction. It is only known that during the Reformation it was taken over by Protestants and regained by Catholics in 1616. In the high altar of the church, there used to be a painting of “The Nativity of Our Lord”; the church possessed an ornamental baptismal font, and just next to the church there was a belfry. There was a school operating next to the church, and the church possessions include a garden and a field. As a result of the Counter-Reformation regulations, Przelewice was incorporated into the parish of Dzwonowo, but in 1637, the churches in Przelewice and Dzwonowo became the branch churches of the parish of Człopa.

The building of the current church comes from the turn of the 19th and the 20th centuries. It was built on a rectangular plan as a single-nave church with a semi-circular presbytery and an almost square-shaped porch added at the entrance. The church was built of red brick in the prevailing style of that times – historicism with the preponderance of neo-Gothic elements. The porch was plastered; in its gable wall, there are double, rectangular doors, which are the main entrance to the church. The body of the nave and the porch are covered with a gable roof; the presbytery is topped with a semi-conical roof. The gable is decorated with symmetrically located, elongated, non-plastered blind windows. In the centre, there is a large cross hollowed in the brick wall. In the corners, there are pinnacles with a crossed pitched roof, ornamented similarly to the front wall with a cross made as a hollow in the wall. The gable pinnacle is topped with a metal cross. The side walls are decorated with pilaster strips that divide them into three parts – in each part there is a large lanceted window. What is noteworthy inside the church is a simple, wooden, beamed ceiling and a modest choir supported by wooden columns.

Next to the church, a papal oak grows, which was planted on the anniversary of the death of Pope John Paul II.

More on the topic:
Geolocation
Search nearby
The Most Sacred Heart of Jesus church
COMMENTS
Sign in to leave a comment.