The Polish Arms Museum
The centre is within the paid parking zone and the network of one-way streets. Getting to the area of ​​interest by E. Gierczak Street is only poss...
04-07-2015 ·
The Assumption of the Blessed Virgin Mary Roman Catholic church in Nowe Warpno
Home / Plan your trip / Practical information / Places of religious cult 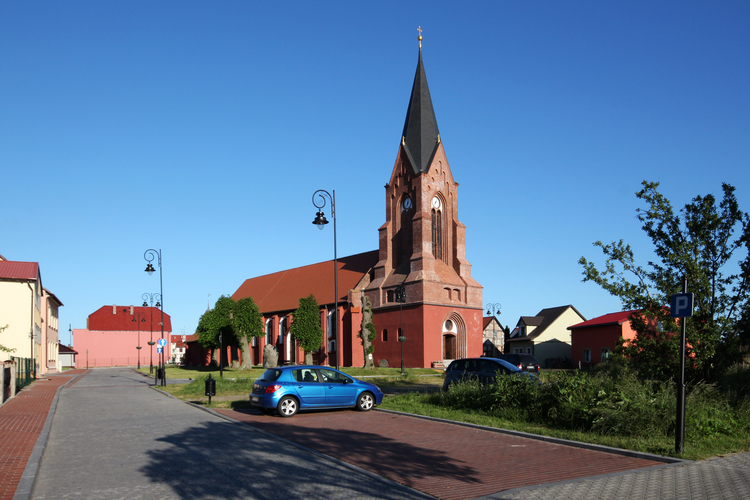 The Assumption of the Blessed Virgin Mary Roman Catholic church in Nowe Warpno is located in the heart of the town, by the end of regional road no 114. The church is situated within the area of the former church cemetery, after which there is no trace today. The building is surrounded from three sides by Kościelna, Warszawska, and Poprzeczna (formerly Szkolna) Streets. From the fourth side, the main entrance faces directly a promenade, which leads along Lake Nowowarpieńskie, located a few dozen meters from the church.

The history of the Assumption of the Blessed Virgin Mary church in Nowe Warpno can be dated back to the second half of the 13th century. Since that time, the church went through a lot in order to be able to function in the present form. The church was destroyed in several fires and recovered its beautiful and stately appearance for a long time, to expand to its present size already in the late 17th century. Throughout this period, till the end of the Second World War, Protestant services were conducted there; the building was consecrated as a Roman Catholic church on August 15th, 1946. Since then, the church fair has been organized on the anniversary of the consecration. It is a relatively large church for such a small town; its capacity amounts to approximately 4,989 square metres, it covers the area of about 406 square metres. It is a single-nave building in a form of an elongated rectangular. On the western wall, where the main entrance is located, there is a tall, soaring tower form the late 17th century, crowned with a golden sphere with a cross on its top. On the northern side of the church, there is the second, side entrance to the building, and from the north, a sacristy, accessed from the east, adjoins the wall of the nave. Inside the church, there is an 18th-century pipe organ on an internal gallery, and a pulpit from the 17th century with a canopy and paintings of four evangelists, located above the presbytery. There is also a baptismal font from the 18th century in the church. The furnishings of the church are completed with a beautiful baroque altar from 1704 and the St John Paul II chapel, where the relics of the Polish Pope, introduced to the church on the day of St Peter and St Paul the Apostles in 2012, are located. W Recently, the church has been comprehensively renovated; doors and windows have been changed, the tower has been refurbished, new clocks have been mounted, the roof has undergone a renovation, and the façade has been thoroughly cleaned and painted. Two stone were place in the vicinity of the church – one commemorating Pope John Paul II and other commemorating all the deceased residents of Nowe Warpno. The current parish priest in Nowe Warpno is Rev. Stanisław Drewicz. The parish supervises the branch churches in Karszno, Warnołęka, Podgrodzie, and Myślibórz Wielki. The church can be accessed by the disabled through a side entrance.

More info: www.parafianowewarpno.pl
More on the topic:
Geolocation
Search nearby
The Assumption of the Blessed Virgin Mary Roman Catholic church in Nowe Warpno
COMMENTS
Sign in to leave a comment.