The Polish Arms Museum
The centre is within the paid parking zone and the network of one-way streets. Getting to the area of ​​interest by E. Gierczak Street is only poss...
04-07-2015 ·
The Elevation of the Holy Cross Roman Catholic church in Trzebież
Home / Plan your trip / Practical information / Places of religious cult 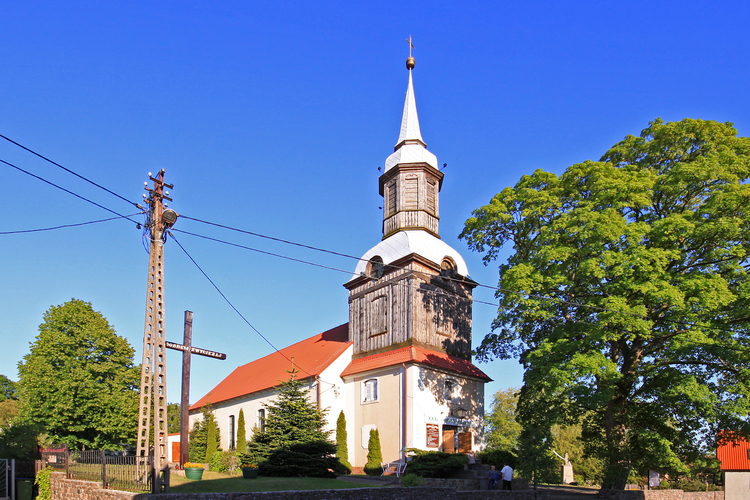 The Elevation of the Holy Cross church in Trzebież is located in a visible place on an elevation, at the junction of Rybacka and Portowa Streets. Driving through Trzebież along regional road no 114 from Police, at the junction of WOP, T. Kościuszki, E. Kwiatkowskiego, and Rybacka Streets, one has to drive straight ahead, heading slightly leftwards; the church will be perfectly visible from the distance.

The history of the church in Trzebież starts in the second half of the 14th century, when the St Catherine Roman Catholic church was built in the village, in the Romanesque-Gothic style. In the second half of the 16th century, after the Reformation, the character of the church changed – Evangelical services were conducted there.  In the next years, in the mid-18th century, the church was partially rebuilt and expanded. During the reconstruction, the nave was prolonged eastwards and a baroque tower (with a spire and a cross on a golden sphere) was added. Two bells cast in Szczecin (one from 1664, the second from 1729) were suspended in the tower. During this period an elongated windows were fitted; also, the choir was added in 1793. After the end of the Second World War, the church became Polish and on September 22nd 1946, it was consecrated as the Elevation of the Holy Cross church. As a date of a church fair, September 14th was chosen. Destroyed in the turmoil of the war, the church was attempted to be rebuilt by Rev. Mieczysław Mroczkowski and the parishioners. When the parish priest was Rev. Józef Kępka, in 1949, there were mission conducted, which ended in consecrating a mission cross standing on the left side of the church entrance. In August 1951 Rev. Paweł Karchanek came to the parish; under his management two sides altars were added in the church. The subsequent parish priests also made every effort to put the church and its surroundings in order. When Rev. J. Król was the parish priest, a sacristy was refurbished; Rev J. Abramski took care of the surroundings of the church – parishioners erected a wall and the green area around the building was developed. The church was painted from the outside, and the walls were previously smoothed. In the church, there is also a historic pipe organ, renovation of which was carried out in the years 1957-1958. In the late 1990s, the church was renovated again. It has been entered into the provincial register of historic monuments (no A-546 from December 22nd, 1965); likewise, the historic clergy house from the early 19th century, located opposite to the church (no A-530 from April 25th, 1997). On the right side of the church, there is a statue of Mother of God of Comfort, made by Zbigniew Policki. The current parish priest is Rev. Mieczysław Wdowiak. The parish supervises the branch church in Niekłończyca. The church can be accessed through high steps only.

More info: www.parafia-trzebiez.pl
More on the topic:
Geolocation
Search nearby
The Elevation of the Holy Cross Roman Catholic church in Trzebież
COMMENTS
Sign in to leave a comment.