The Old Town Hall, the one next to Muzeum Historii Szczecina
The Old Town Hall in Szczecin was built at Sienny market square in the fifteenth century by the town authorities to replace the wooden building of...
22-04-2015 ·

The Polish Arms Museum
The centre is within the paid parking zone and the network of one-way streets. Getting to the area of ​​interest by E. Gierczak Street is only poss...
06-12-2015 ·

The Orlik playing field
The playing field was established as a part of the “Moje Boisko - Orlik 2012” project. It consists of two playing fields which can be used to...
23-05-2015 ·

The Town Fortifications
Due to the condition in which the defensive walls have been preserved, Pyrzyce can be easily  called Polish Carcassonne. The first m...
23-04-2015 ·

Długie (Swobnickie) Lake
Długie Lake is of glacial origin. It has a shape of an elongated ribbon in the direction of the meridional. It is the second largest lake of the Gr...
20-02-2015 ·
The St Peter and St Paul the Apostles Roman Catholic church in Police-Jasienica
Home / Plan your trip / Practical information / Places of religious cult 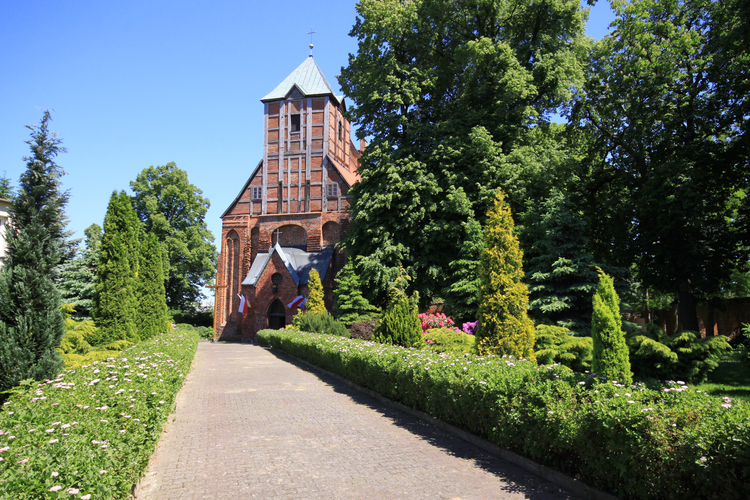 The St Peter and St Paul the Apostles Roman Catholic church in Police-Jasienica is located on Kościelna Street, on a small elevation near regional road no 114, leading from Police to Nowe Warpno. The area of the parish can be accessed from two directions: from Dworcowa Street, just past the entrance gate (DW no 114), there are high steps and a long alley leading to the church, while from Kościelna Street, the church can be accessed through a flat ground. There is a clergy house located to the right. In the vicinity of the church, there are ruins of the Augustinian monastery, which are the remnants of the mediaeval Augustinian monastery established there in the 14th century.

The St Peter and St Paul the Apostles parish church in Police-Jasienica is a building that is really conspicuous, not only due to its architecture, but also because a place where it is situated. Elevated high above the street, it is a building that dominates over the town. Its beginnings as a wooden church date back to the end of the 13th century. After a fire, which damaged the building in the 14th century, the church was rebuilt in stone. However, over the years, it fell in disrepair in the late 17th century. The church was renovated and expanded in 1725, referring with its form to the Gothic style. During this renovation, a tower was added on the western side of the building. Unfortunately, in the second half of the 19th century, the church was again struck with a fire. After these events, a new tower had to be erected. It was located above the nave and was topped with a sphere on which a cross was situated. In this period, the presbytery was also added on the eastern side of the building. Up to this day, there is a painting from 1858 entitled “Christ speaking with Maria and Marta” (oil on canvass). The building was consecrated as a Roman Catholic church on June 29th, 1947, and since then, each year a church fair has been organized on the anniversary of the event. The church in Police-Jasienica has been entered into the West Pomeranian provincial register of historic monuments (under the number A-500 from 5.07.1958). The current parish priest is Rev. Waldemar Szczurowski. The parish supervises a branch church in Tatynia. The church’s driveway is located on a flat ground.

More info: www.parafiajasienica.com
More on the topic:
Geolocation
Search nearby
The St Peter and St Paul the Apostles Roman Catholic church in Police-Jasienica
COMMENTS
Sign in to leave a comment.