The permanent exhibition of white-tailed sea eagles
The white-tailed sea eagle is a symbol of the Wolin National Park. It is also known as sea eagle or erne. A couple of sea eagles can be found in th...
28-04-2015 ·
The St Casimir the Crown Prince Roman Catholic church in Police
Police
Home / Plan your trip / Practical information / Places of religious cult 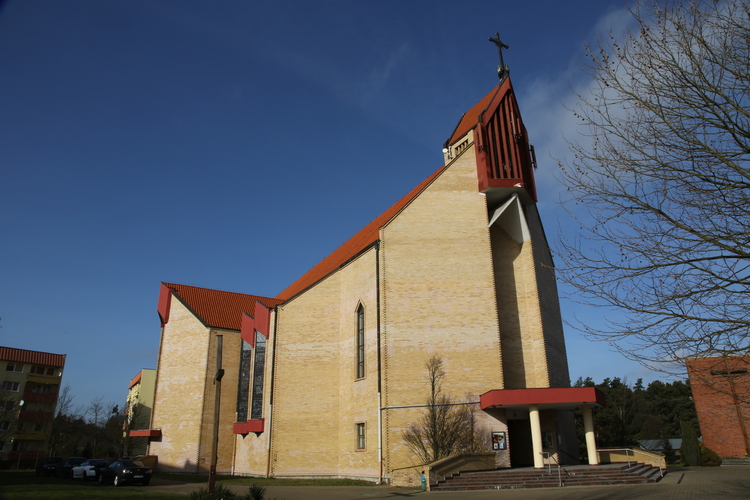 The St Casimir the Crown Prince church is located in the new part of Police. It is situated on Wyszyńskiego Street, next to ks. bp. K. Majdańskiego Roundabout, nearby the “Kinga” sales and service centre. By the church, there is a free-of-charge car park, and bus stops for lines no 102, 103, 106, 107, 111 and Linia Samorządowa [the Self-Government Bus Line], Linia Działkowa [the Allotment Line], and Linia Plażowa [the Beach Bus Line]. Within the area of the parish, on the right side of the main entrance, there is the Divine Mercy chapel. In the same building, there are religious education rooms, a parish café, a bookshop, and a clergy house.

The parish of the St Casimir the Crown Prince is the youngest of the parishes in the commune of Police. It was established by Bishop Kazimierz Majdański on June 22nd, 1985. The construction of the church started after a relatively long period of waiting, - in 1922. A year before this fact, on March 4th, 1991, the relics of the patron saint of the parish – St Casimir – were moved there. Two years later – on June 8th, 1994, Archbishop M. Przykucki laid the foundation stone under the construction of the church, and on December 6th, 1997, the church was consecrated. Less than two years later, on June 7th, 1999, John Paul II consecrated the parish bells in Bydgoszcz during his visit to Poland. The long-time process of constructing the church was crowned with the consecration by Archbishop Z. Kamiński, which took place on October 29th, 2000. One of the most significant event that have recently occurred was the introduction of the relics of John Paul II on October 26th, 2014, and mounting them in a specially prepared altar in a side chapel. The church is incessantly teeming with life. There are many communities operating in the parish, such as Caritas, the Eucharistic Movement of Youth, the Youth Oasis of the Light-Life Movement, the Living Rosary, and the Rosary for Youth, the Franciscan Secular Order, the “Maria Cantat” choir, the “Stella Maris” schola, and many others. Also, the Family Counselling for Parents and Youth operates there. Eight priests minister to the parish along with Rev. Dean Waldemar Gasztkowski – a parish priest. There are also Ursuline Sisters present in the parish. There is a driveway for the disabled.

More info: www.kazimierz.police.info.pl
More on the topic:
Geolocation
Search nearby
The St Casimir the Crown Prince Roman Catholic church in Police
COMMENTS
Sign in to leave a comment.