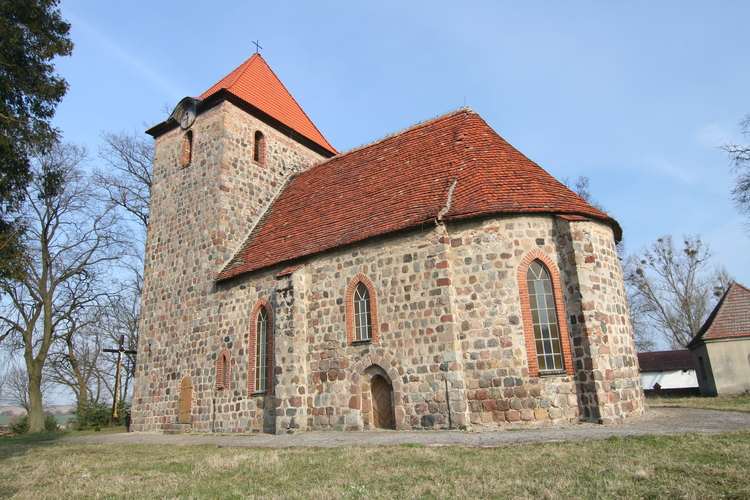 The church is located in the middle of the village, surrounded by the greenery. Driving from the town of Przyjezierze, we go along a straight road for 3.8 km, and arriving at Dolsk, we turn right. The church is on the right side of the road.

The church is situated in the centre of the village, on a small elevation. It was built in the late 13th century, and rebuilt in the 15th and 19th century. It is one of few village Gothic churches made of fieldstones arranged in a chequered pattern.

Originally, it was an aisleless church, built on a rectangular plan with a tower as wide as the nave. At the turn of the 15th and 16th centuries, a semi-circular apse was added to the nave. The reconstruction of the church in the 19th century mostly consisted in enlarging windows, leaving two portals from the former design. On the left, internal reveal of the tower’s portal, there is a chequered pattern (regarded as a symbol of the builders of the church). The original altar, showing apostles, and two tin candlesticks from 1712 are at present in a museum in Berlin. In the church, there is a bell from 1770, with the diameter of 73 cm.

The churchyard, once functioning as a cemetery, is surrounded by a wall with gates.

: The parish church of the Holy Spirit

: The parish church of the Holy Spirit
Search nearby
The St Elisabeth of Hungary branch church
COMMENTS
Sign in to leave a comment.