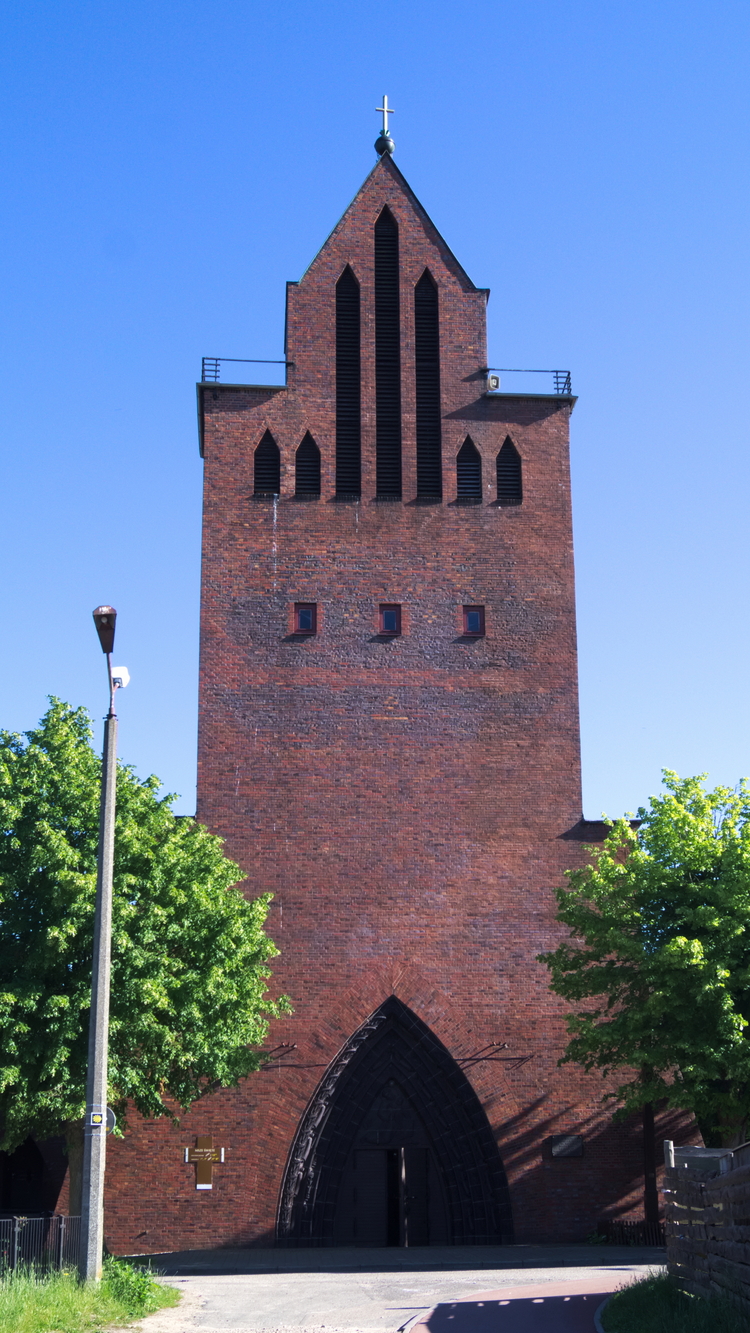 The church is located in the eastern part of Sławno, near a railway track. While standing near the post office, one needs to go along Polanowska Street southwards, and then turn left into Kościelna Street. The church is situated at the end of the street.

The St Anthony church was built in the modernistic style in 1928. The architect of the church was Diedrich Suhr. This fact is recalled by a plaque located on the eastern wall of the church tower, where a name of the architect and the date of the construction of the building are written. The church was built in the times when Protestantism was an official religion of Pomerania. In 1924, Rev. Franciszek Niering came to the then German Sławno and wanted to establish a Roman Catholic ministerial centre and build a church in the town. In spite of many objections of the residents of the town, who were mostly Protestant, Reverend Niering along with the architect Suhr were successful in bringing the idea of constructing a church into effect. The church was formally consecrated already in 1928. The designs of the young architect of Sławno, Diedrich Suhr, can be found in other places of Sławno. Among them is, for instance, the current Community Centre in Sławno.

It is a hall church with a separated presbytery, made of brick, with a pitched roof and a tower located from the north. Already at the entrance, a lanceted door portal catches the eye of visitors. In the reveals, there are bas-reliefs depicting angels and plant motives, and in the upper part of the portal a bas-relief of St Anthony holding Infant Jesus is located. This is a work of Friedrich Theilmann of Cologne. The clergy house, which adjoins the church with its western wall, is an integral part of the church.

In the church, there is a historic Renaissance altar made by sculptor named Schnitzer and depicting scenes from the life of St Mary. The altar is a triptych: on the left side, there is a scene of the Annunciation and the Visitation of St Elizabeth, in the central part - the Pieta with St Martin and St Maurice, on the right side, in turn, there is a scene of the Nativity of Jesus and the Adoration of the Three Magi. When the altar is closed, the saints of the early Christianity can be seen on its wings: St Francis, St Hedwig, St John of God, St Therese of the Child Jesus, St Barbara, St Peter Canisius, St Elisabeth of Hungary, and St Otto of Bamberg. The church’s ceiling is wooden with characteristic golden ornamentation. In front of the altar, on the rood beam with a decorative inscription “Oto Matka Twoja” [It is your mother], there is across with Jesus and two statues located on its sides – the statue of St Mary and of St John. On both sides of the nave, there are 14 bas-reliefs depicting the stations of the Cross.

The St Anthony church is a parish church belonging to the deanery of Sławno.

More info: www.koszalin.opoka.org.pl/new/p.php?m=6&p=163
More on the topic:
Geolocation
Search nearby
The St Anthony church
COMMENTS
Sign in to leave a comment.