The Polish Arms Museum
The centre is within the paid parking zone and the network of one-way streets. Getting to the area of ​​interest by E. Gierczak Street is only poss...
04-07-2015 ·
The Assumption of the Blessed Virgin Mary church
Sławno
Home / Plan your trip / Practical information / Places of religious cult 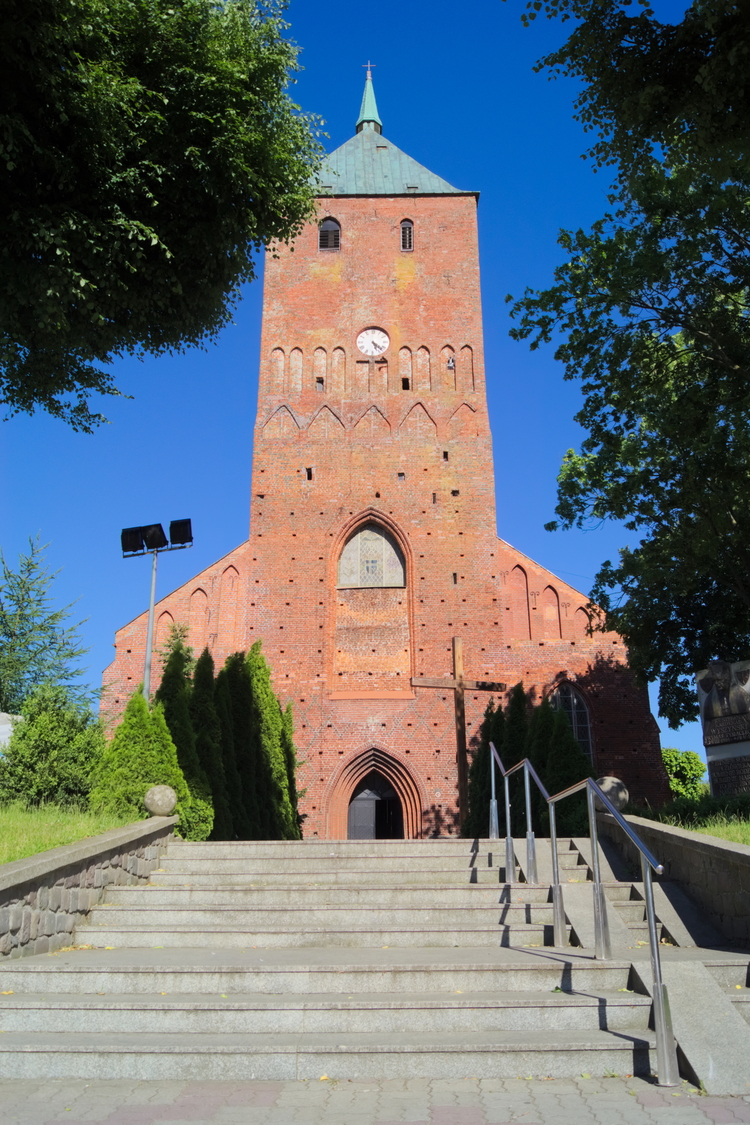 The church is located in the strict centre of the town, on Wyszyńskiego Square, about 1 kilometre from a railway station.

The Assumption of the Blessed Virgin Mary church is a Gothic church built in the 14th century. It was founded by Duchess Zofia, a wife of Barnim IV. The patronage over the church was held by the knights of St John. The high altar in the church is oriented towards the east. The foundations were made of stone. The church was built of ceramic full brick in Wendish bond. This imposing building with an enormous tower and a polygonal presbytery is a three-nave basilica. The church tower has four storeys. Above the entrance portal, there is a large lanceted window. There is a clock face on the tower with a row of narrow panels located underneath. Two noteworthy elements are a lanceted frieze around the tower and an ornament in the shape of a cross, located just under the church’s roof. The church was built on a rectangular plan, then a chapel and a sacristy were added, which resulted in the formation of a crest. The presbytery, the nave, and the aisles have a star-like vault, while in the church’s porch there is a cross-ribbed vault.

The furnishings of the church did not survive the war turmoil. In 1945, Soviet soldiers entered Sławno and destroyed a considerable part of the city centre. The church was vandalized; the interior of the naves and the tower was burnt down. Before the Second World War, the church was famous of a beautiful, large Renaissance high altar. Currently, the church has a high altar in a form of a triptych modelled on Gothic, a pulpit, and the Stations of the Cross from the 1950s. Apart from those, the following items are also worth noticing: a baptismal font from the 19th century, a baptismal bowl from the 16th century, three wrought iron bells from the 1920s, and an oil painting of “The Circumcision” from the 18th century.

In the church, there is a plaque commemorating an Evangelical pastor, Dietrich Bonhoeffer, unveiled on the 50th anniversary of his death in 1995. The inscriptions on the plaque are in Polish and in German. It was founded by the Bonhoeffer International Society. Dietrich Bonhoeffer was a member of the Confessing Church. He established a seminary for Evangelical priests of Pomerania in the town of Finkenwalde (currently Szczecin-Zdroje). He officially opposed the ideology of Hitler. In 1937, the seminary was closed. Bonhoeffer led the further activity in the region of Sławno and Koszalin through superintendents with the help from Friedrich Onnasz from Koszalin and Eduard Bloch from Sławno. The work of seminary groups was interrupted by a secret state police in 1940. Bonhoeffer was a vice-chancellor of the seminary of the Confessing Church. He died in a concentration camp in Flossenburg in 1945.

The Assumption of the Blessed Virgin Mary church, until the Reformation was introduced in Pomerania, was a Roman Catholic church, and then – till 1945 – a Protestant church. After 1945, the building was used by Catholics again. Currently, it is a parish church belonging to the deanery of Ustka.

: Brama Słupska [the Słupsk Gate]
Search nearby
The Assumption of the Blessed Virgin Mary church
COMMENTS
Sign in to leave a comment.