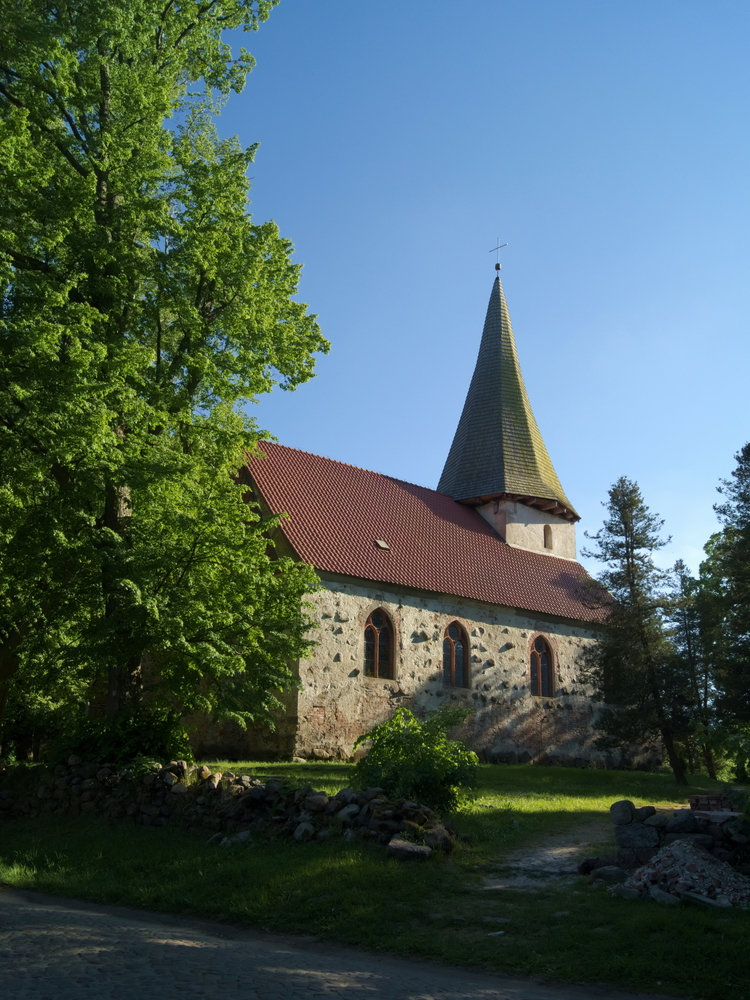 The church is located in the centre of Łącko. The town is situated in the north-western part of the commune of Postomino on Lake Wicko. Łącko is located about 8 km to the south west of the seaside resort of Jarosławiec.

The Gothic church in Łącko was built in 1475, but historians cannot agree on the date of its construction. The construction of the church is sometimes moved even to the 13th century. In 1500, the church was extended to have three naves. The central nave ends with a multilateral presbytery. The church was rebuilt again in 1607, which was motivated by the necessity of the reconstruction of the church after a fire that had destroyed the roofs. Till the beginning of the 17th century, each nave was covered by a separate roof. There are fragments of arches visible above the presbytery and near the northern wall, which may indicate that the church used to have a vault or there were at least plans to build a vault.

It is a hall church built from red brick and fieldstones. It has a Renaissance altar from about 1600 with three preserved paintings of “The Last Supper”, “The Visitation” and “The Crucifixion”. The noteworthy elements of the furnishings include a stone baptismal font from the 16th century, a baroque crucifix, and a late Gothic sculpture of the Virgin and Child with Saint Anne from about 1500. Near the southern wall of the nave, there is a sacristy with a barrel vault and a niche with a brick bench. In the 19th century, the church was rebuilt again. The window openings were changed from rectangular to a lanceted shape, traceries and a new ceramic framing were added to them. White walls inside the church with visible fieldstones in the wall, brick columns, a decorative ceiling, an ornamented pipe organ internal gallery – all this makes quite an impression on the tourists visiting the church. Just past the entrance to the church, there is a plaque commemorating the inhabitants of the parish of Łącko who died before 1945.

The surroundings of the church is also impressive. The charm of this place is made by old, monumental lindens. Around the church, there used to be a cemetery. The building is surrounded by a wall made of erratic boulders. The brick Gothic gate also catches the eye of the visitors. Tourists are prepared for such a view by the images of the road leading to the church from Jarosławiec. At first, visitors have to drive a somewhat narrow road to the town. Then, in the centre of Łącko, there is a paved road with many half-timbered buildings preserved along the road. This view gives the impression of travelling in time. The Visitation of the Blessed Virgin Mary church is undoubtedly a top class example of the sacral architecture of Pomerania.

More on the topic:
Geolocation
Search nearby
The Visitation of the Blessed Virgin Mary church
COMMENTS
Sign in to leave a comment.