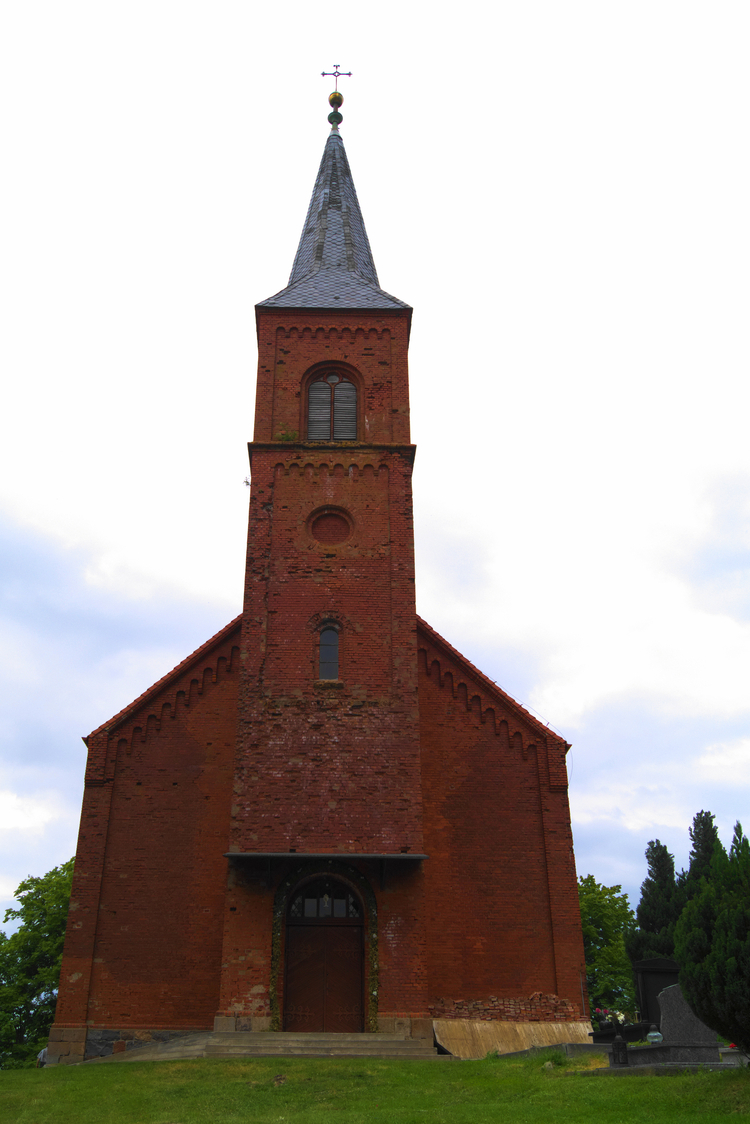 The church is located on a small hill. It was erected in 1873 in the place where there used to be another church about which not much information was left. The idea of the construction of a new church was brought into effect in connection with the increasing prosperity of the inhabitants of Rusinowo. The initiator of the construction was a local village leader Martin Schüttpelz, who involved the inhabitants of the village in it. He collected funds among them, but he also founded a cross, altar candlesticks, or a silver baptismal jug in the church. The old church was pulled down and a new brick building was erected in its place very quickly. On December 20th, 1874, the consecration Mass was celebrated. Due to its location on a hill near the sea, it used to be treated as a navigation point by sailors.

The church was built in the neo-Romanesque style, but it contains forms and ornaments of the Gothic style. The building stands on a foundation of granite blocks. It is built of red brick and has a tall tower with an octagonal cupola covered with a slate roof. The tower is 42 meters high. On the cupola, there is a steeple with a cross. The tower is ornamented with circular blind windows and arcade friezes. Inside the tower, there is a bell from 1874, cast in bronze by the workers of the C. Foß und Sohn company.

The church is a single-nave building erected on a rectangular plan. The presbytery is small, from the east ending with an apse that is adjacent to a sacristy. In the presbytery, next to a contemporary wooden altar from 1991, made by Józef Drzazga, there is an oil painting “The Lamentation of Christ”. The painting was painted by Professor Anton Weber and comes from an altar founded by the artist in 1898. To the left of the altar, there is a pulpit.

The nave of the church is covered by a tiled gable roof. The wooden structure of the roof is extended in a form of a low attic accessible from the tower. The roof trusses visible from the nave are connected by the bottom of ceiling beams. Windows in the nave are placed high. Over the entrance, there is a pipe organ internal gallery with a pipe organ made by the company of Ch. F. Voelkner of Duninowo, dating back to 1874, which currently needs renovating. The internal gallery can be accessed from the nave through a straight steps with a balustrade with banisters. In the church’s porch, there is a plaque commemorating the dead of the former Evangelical parish. The plaque was consecrated during an ecumenical service in 1997, attended by former inhabitants of the town.

Old photographs often show the modest interior of the church. What catches the eye is a model of a sailing ship suspended in the middle of the nave. Such votive replicas were easily found in seaside churches. They were founded by sailors inhabiting the towns were the churches were located. Unfortunately, the replica of a sailing ship has not survived to this day. After entering the church, tourists are surprised by shining tiles of the floor, modern paintings depicting the Stations of the Cross, old walls, and a visible roof truss of the rafter framing. There is a stone wall around the church, which also surrounds a cemetery located within the churchyard.

The church is a branch church of the parish of Łącko.

More on the topic:
Geolocation
Search nearby
The Nativity of the Blessed Virgin Mary church
COMMENTS
Sign in to leave a comment.