Domek Kata [the Executioner’s House]
Domek Kata on 3 Grodzka Street is a Gothic burgher’s house erected in the 15th century on a trapezium plan, which was motivated by a curved line of...
22-05-2015 ·
The Immaculate Conception of the Blessed Virgin Mary parish church
Połczyn Zdrój
Home / Plan your trip / Practical information / Places of religious cult 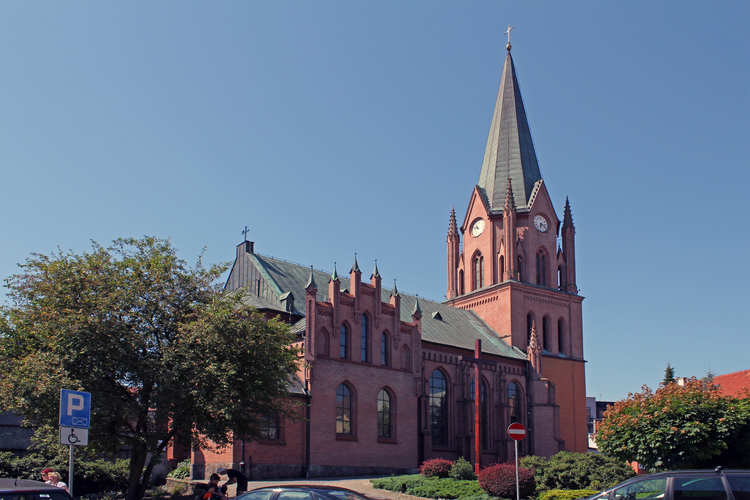 The church is located in the centre of the town, near a road leading to a town’s market square, surrounded by a preserved buildings of the old town.

The church was built in the 15th century and rebuilt repeatedly – the largest reconstruction took place in the 19th century. In 1505, a fire consumed the church for the first time, the building, however, was rebuilt due to the help of Bishop Erazm. In 1547, a church tower was added. In 1626, the church obtained a beautiful high altar made of wood by a famous sculptor named Brock. In the years 1870-1880, the church underwent a major overhaul, which resulted in changing the architectural style of the building to neo-Gothicism. At the same time walls and a tower were added, a clock was installed in the tower along with four bells. The current church owes its appearance to the last reconstruction in the years 1850-60. From the west, the church had a massive tower, which burnt down in 1950 during a fire caused by an atmospheric discharge. Bells was destroyed, too. The church tower was not rebuilt until 1980.

The church was built on a rectangular plan with a separate presbytery ending multilaterally. The building is built of brick and granite, with lanceted windows. From the south, there is a chapel; from the north – a vestry and an internal gallery supported by wooden pillars where a working pipe organ is located. The historic furnishings of the church include a bronze tombstone of the last Roman Catholic bishop of the diocese of Kamień Pomorski - Erazm Manteuffel, who died in 1544, a bas-relief of “The Last Supper” from 1626 made by the sculptor named Brock; statues of four evangelists coming from the 18th century, and a middle part of a pulpit from 1769. In 2000, a monument of Erazm von Manteuffel, whose history is connected with the church in Połczyn-Zdrój, was placed in the churchyard.

: The Old Town
Search nearby
The Immaculate Conception of the Blessed Virgin Mary parish church
COMMENTS
Sign in to leave a comment.