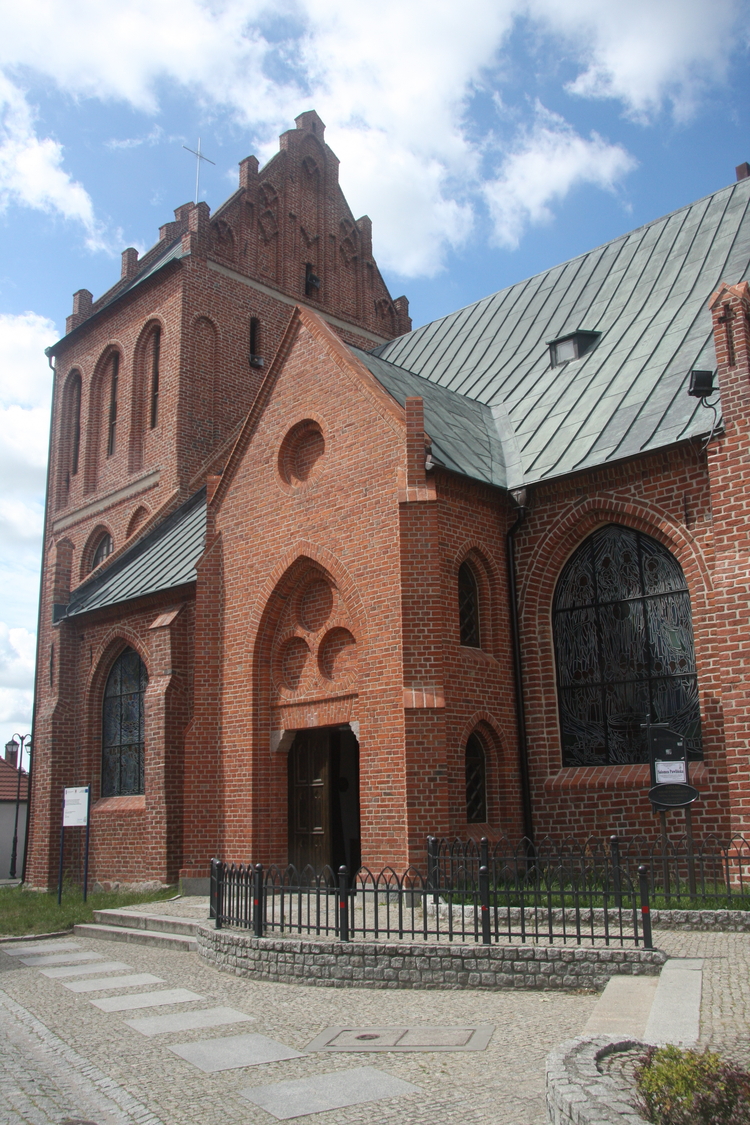 The church is located in the town centre on Jana Pawła II Square. Next to the church, there is a coach stop and a parking lot.

The St Michael the Archangel church in Karlino was built in the late Gothic style. It was erected in 1510 by order of Bishop Martin Carith, most likely in place of a previous church destroyed in 1409. The church is an oriented, non-plastered, three-nave building made of brick. On the side of the building, there is a tower with the entrance to the church. The tower has a gable roof; similarly, the entire church has a gable roof, covered with sheet copper. Window openings are finished with a circular arch. The presbytery of the church is separated from the nave, finished three-sidedly. The aisles have various heights. Inside, there is a stellar vault, with ribs protruding from the walls. The building used to be a Protestant church. The parish of the church included the town of Karlino and the villages of Kowańcz, Redlino, and Karścino. The church was surrounded by a cemetery, where the inhabitants of Karlino and nearby villages were buried. In the early 19th century, the cemetery was moved to Koszalińska Street on the Wiatraczne Hill. The present appearance of the church differs from the original looks, because the building was considerably damaged in a fire in 1685. The accounts tell that during the fire, the life-sized painting of Bishop Martin Carith was destroyed. In 1807, the church was a place where the French troops were stationing. Because of the fact that it was also used as a military warehouse, the building was significantly damaged. A part of furnishings was moved to a rectory, where services were conducted. Not earlier than in the end of the 19th century did the church regain its original character. Later, the church was renovated several times; for instance in 1866, 1872, 1890, and in 1894. In 2006, the area surrounding the church was developed as a part of revitalization of the Karlino’s town centre. At that time, a monument of the patron saint of the parish of St Michael the Archangel was erected there. In 2012, the church underwent a major overhaul as a part of a project subsidized by the Ministry of Culture and National Heritage. During the works, the church tower was renovated and adapted for visitors. Tourists can visit the tower after previous arrangement with the Tourist Information Centre. There is also an opportunity of having a guided tour around the tower.

A pipe organ in the church in Karlino is particularly noteworthy. It was built in the neo-Gothic style, most likely in 1854 (as an inscription on a pipe indicates). In 2008, the instrument, not used for many decades, was renovated. Interestingly, the keyboard of the pipe organ has its colours reversed. Tonic keys – normally white – are black, made of ebony, while diatonic keys – usually black – are covered with ivory. The historic furnishings of the church include several tombstones from the 17th and the 18th century, a classicist chandelier made from crystal glass from the 19th century, a cast-iron bell from 1686, made by Ernest Kreideweiss, the painting of “The Burial of Jesus Christ” from 1858, a classicist altar from the 18th century with the oil painting of “The Prayer in the Garden” from 1891, painted by E.A. Fischer (the original sketch is located in the Museum of the Karlino Region), a Romanesque granite stoup from the 12th century, found during the development of the area surrounding the church; currently, excavated and cleaned, it is situated near the side entrance to the church.

The church is available to the disabled due to a driveway for wheelchairs leading to the entrance. From many interesting stories connected with the church, three are worth mentioning. The first one is the information that the church is probably connected with the former castle of the bishops of Kamień Pomorski with an underground tunnel. Another interesting information is that the last Catholic bishop of Pomerania – Erazm von Mantueffel, living in the castle in Karlino in the years 1521-1544 – is buried there. What is more, it is said that Karol Wojtyła prayed in this church, when he stayed there with his friends during one of his canoe trips.

More info: http://parafia-karlino.manifo.com/
More on the topic:
Geolocation
Search nearby
The St Michael the Archangel church
COMMENTS
Sign in to leave a comment.