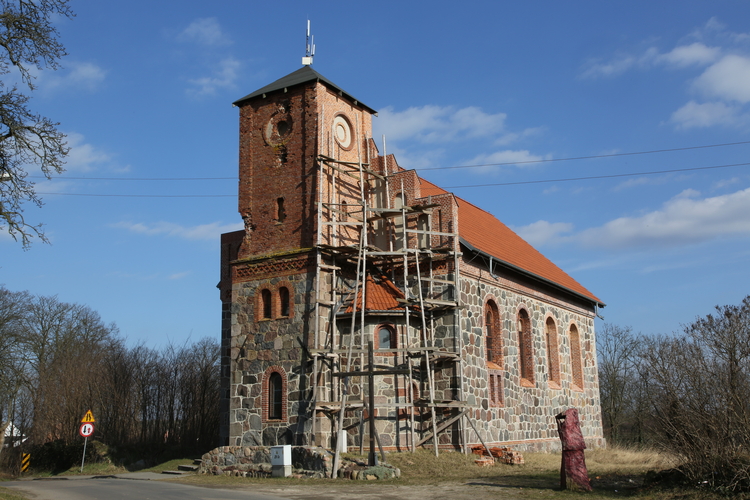 Stare Brynki are located 30 km south of Szczecin. In order to reach the village, one has to head for Gryfino along national road no 31, and turn left into Zielona Street past Daleszewo and before Nowe Brynki and Czepino. The church is less than 3 km from there.

The St Faustina church in Stare Brynki was erected in the late 19th century in place of a previous church. The building was built in the neo-Romanesque style, but we can also find features characteristic of the Gothic style. The church was built of granite blocks, the windows and portals are finished with a semi-circular framing, and the vault of the apse has no ribs. The church tower was built of red brick.

The building was slightly damaged during the Second World War, and it fell in disrepair as a result of the thefts after the war. Firstly, wooden elements, then stone elements were removed. Because of these actions, the church was destroyed in 70%. The southern wall of the building and the southern part of the presbytery were almost completely pulled down.

Thanks to the efforts of the then village leader, priest, and inhabitants, the renovation works were started. The works connected with the reconstruction of the building was carried out from 1988 till 2007. The reconstruction was divided into stages, because of the lack of financial liquidity for this purpose. The last element – the roof – was founded by the commune of Gryfino, which assigned 80 thousand PLN for this purpose. On November 8th, the renovated building was consecrated by the metropolitan of the Szczecin-Kamień Pomorski diocese, Archbishop Zygmunt Kamiński. The patron saint of the church became St Faustina Kowalska.

Currently, the church belongs to the Roman Catholic parish of St Mary Queen of Poland in Radziszewo.

More info: www.parafia.radziszewo.net
More on the topic:
Geolocation
Search nearby
The St Faustina Kowalska branch church
COMMENTS
Sign in to leave a comment.