The Polish Arms Museum
The centre is within the paid parking zone and the network of one-way streets. Getting to the area of ​​interest by E. Gierczak Street is only poss...
04-07-2015 ·
The Greek-Catholic Church of Exaltation of the Holy Cross
Home / Plan your trip / Practical information / Places of religious cult 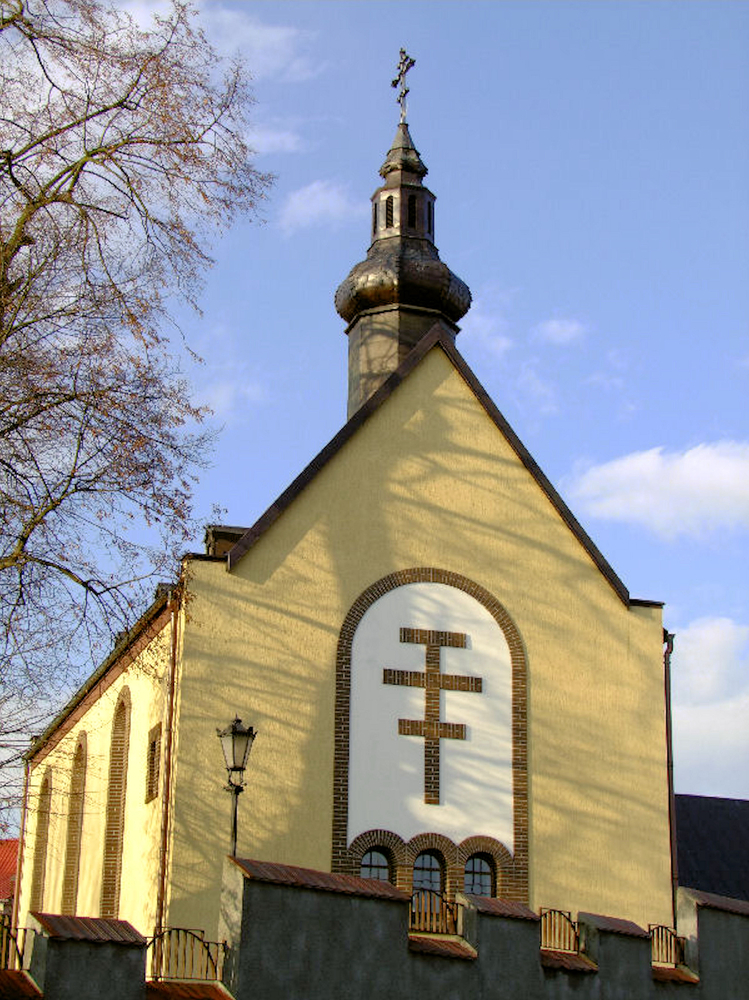 The church is located in the southern part of the town, near the intersection of 12-ego Lutego Street, Kilińszczaków Street and Zdobywców Wału Pomorskiego Avenue, by the road No. 178 leading through Trzcianka in the direction of Poznań.

The Greek-Catholic Church of the Exaltation of the Holy Cross is in a building that was erected as an evangelical hospital chapel in 1923-24 during the systematic expansion of the hospital complex. It was built in a modest eclectic style with a predominance of neo-Romanesque elements. On the eastern wall of the church a relief from the 1920s was laid to commemorate those killed in World War I. It depicts Christ comforting a young woman with a child - the widow of a soldier. Originally, the names of the dead on the battlefields of the First World War were also placed on the wall of the building. The building was laid out on a rectangular plan with a semicircular apse where the chancel was. On the southern side, the nave is partially separated to form a vestibule with stairs leading to the matroneum. The interior of the church is aisleless, the vestibule ends on the north side with a wide opening, topped with a basket arch. On the north side of the nave there is a wide rainbow-basket arch and smoothly opening towards the apse of the chancel. In front of the chancel there is a contemporary iconostasis (made in 1996), separating the chancel from the main part of the church. The iconostasis was created according to the design of Valentina Biriukowicz from the Academy of Fine Arts in Kiev, along-time easel painting restorer (mainly icons) and a visual artist. Woodwork, rich in decorative woodcarving details, was done by Zbigniew Marus from Stary Chwalim near Barwice. All the icons on the panels of the iconostasis were written by the author of the project. The Virgin Mary, the Annunciation with the Archangel Gabriel are depicted in tsarist gates. Below are the four evangelists: Matthew, Luke, John and Mark. At the left door, at high panels with a semicircle at their top appears a tall standing figure of St Lavrenty, at the sides - St Nicholas the Miracle Worker, and Our Lady with Christ the King (as the Child) sitting on Her lap. At the right door appears St Stephen, and on His sides: Christ the King (Reigning) and the scene of the Exaltation of the Holy Cross. Above the gates, in the entablature, what is depicted from left to right is: the Nativity and Baptism of Christ, the Resurrection of the Dead, and in the central axis - Christ Pantocrator, the next icons are: the Assumption of the Blessed Virgin Mary, Pentecost and the Transfiguration on Mount Tabor.

After the Second World War, the building was used as an auxiliary parish Church of St Nicholas, and, later, began to be open to the Greek Catholics and services were conducted alternatively in the two rites. The first Greek-Catholic Mass in Wałcz was conducted by Father Theodore Markiv. This important event took place on 21st June 1959 on the day of Pentecost.  On 25th September 1994, during the jubilee celebrations of the 35th anniversary of the parish in Wałcz, after long and persistent efforts of the congregation, the council of the Orthodox Church and Father Bogdan Hałuszka, it was announced by today's Archbishop Jan Martyniak that Archbishop Czesław Domin - the ordinary of the Diocese of Koszalin - Kołobrzeg - gave the church to Greek Catholics.

More info: http://www.grekokatolicy.walcz.pl/
More on the topic:
Weather
Geolocation
Search nearby
The Greek-Catholic Church of Exaltation of the Holy Cross
COMMENTS
Sign in to leave a comment.