The Polish Arms Museum
The centre is within the paid parking zone and the network of one-way streets. Getting to the area of ​​interest by E. Gierczak Street is only poss...
04-07-2015 ·
St. Peter and St. Paul Orthodox Church
Stargard Szczeciński
Home / Plan your trip / Practical information / Places of religious cult 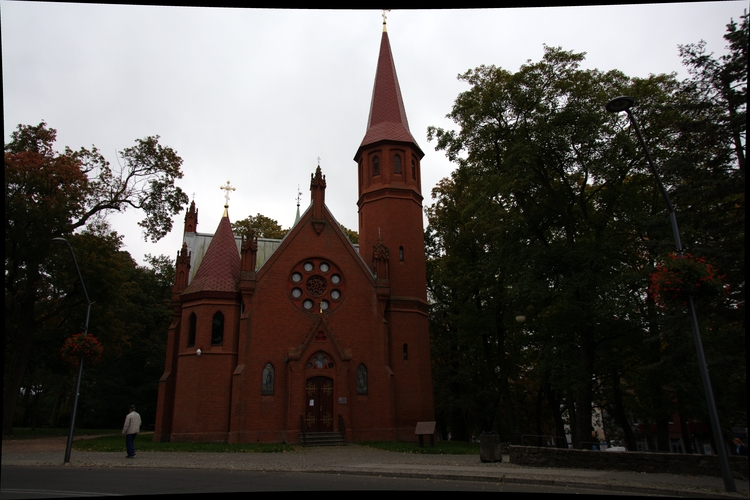 St. Peter and St. Paul Orthodox Church in Stargard is an Orthodox parish church. It belongs to the Deanery of Szczecin and the Diocese of Wrocław and Szczecin of Polish Autocephalous Orthodox Church.

The neo-gothic historic red-brick church was built in 1890. It belonged to the Evangelical-Reformed commune until the town was captured by the Red Army, and was dedicated to Christ. Catholic masses took place in the church after the war until 1951. The church was handed over to the Orthodox Church in 1953.

The building is a unique church in Pomerania, because it bears the characteristics of eastern religious architecture, although it was built for the Protestants. The temple lies on a Greek cross with two slender octagonal towers. Lower unfinished eastern tower has a pyramid cupola, slightly towering over the roof, and finished western tower is topped with an octagonal cupola and measures 33 m. The elevation is decorated with floral motifs and wimpergs. It has had its present form since 2012, when it was radically overhauled, which was financed by EU funds.

Inside there is a simplified iconostasis (with the icons of Jesus, Mother of God, St. Peter and Paul - the patrons of the church, and St. Nicholas - patron saint of the affiliate Orthodox church in Dolice). A bell cast in the foundry in Szczecin in 1890 was placed at the tower.

The annual Review of Liturgical and Paraliturgical Songs take place in the Orthodox church.

The church is monitored.