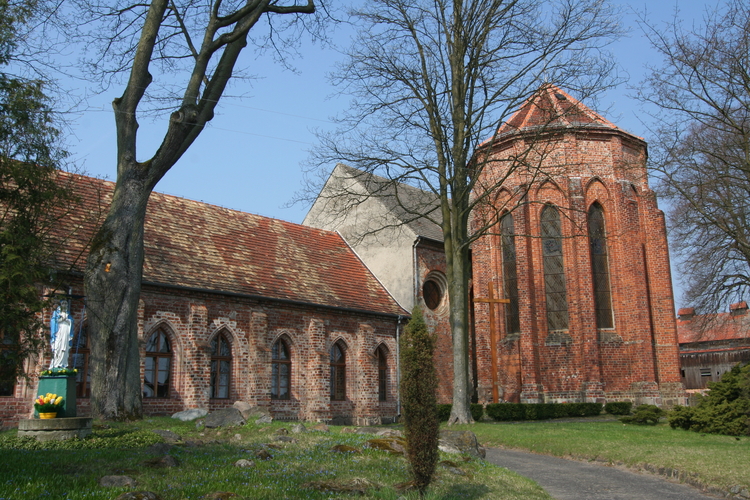 The church is located in the northern part of the village, on the north-eastern bank of the lake. Nearby there is a district road No. 160 and the seat of “Drew-Ren” company.

The beginnings of Bierzwnik’s development are connected with the influence of the nearby Cistercian Abbey. The construction, inspired by the French style, was erected by monks at the turn of the 13th and 14th centuries. Another important aspect in the history of the surrounding area, was the fact that since 1402 it had been governed by the Teutonic Order. At the beginning of 1454, the Teutonic Order sold the land which they owned in the March of Brandenburg. In the 16th century, with the rise of Lutheranism, the Order and its wealth had been secularised. The Thirty Years’ War, which ended in 1648, didn’t cause any damage in the village. Unfortunately, the temple wasn’t that lucky – the western part of the church and the abbey were ruined. Until now, only the presbytery, two bays of the church, and two wings of the abbey on the first floor, have been preserved.

The interior of the church is spacious and illuminated by the light coming gently from the stained glass, pointed-arch windows. Outdoors, the polygonal, high presbytery supported by buttresses, and the medieval architectonic ornamentations draw visitors’ attention.

More on the topic:
Geolocation
Search nearby
The parish church of The Mother of God of the Scapular
COMMENTS
Sign in to leave a comment.