The Polish Arms Museum
The centre is within the paid parking zone and the network of one-way streets. Getting to the area of ​​interest by E. Gierczak Street is only poss...
04-07-2015 ·
Cerkiew prawosławna pw. św. Trójcy [Holy Trinity’s Orthodox Church]
Home / Plan your trip / Practical information / Places of religious cult 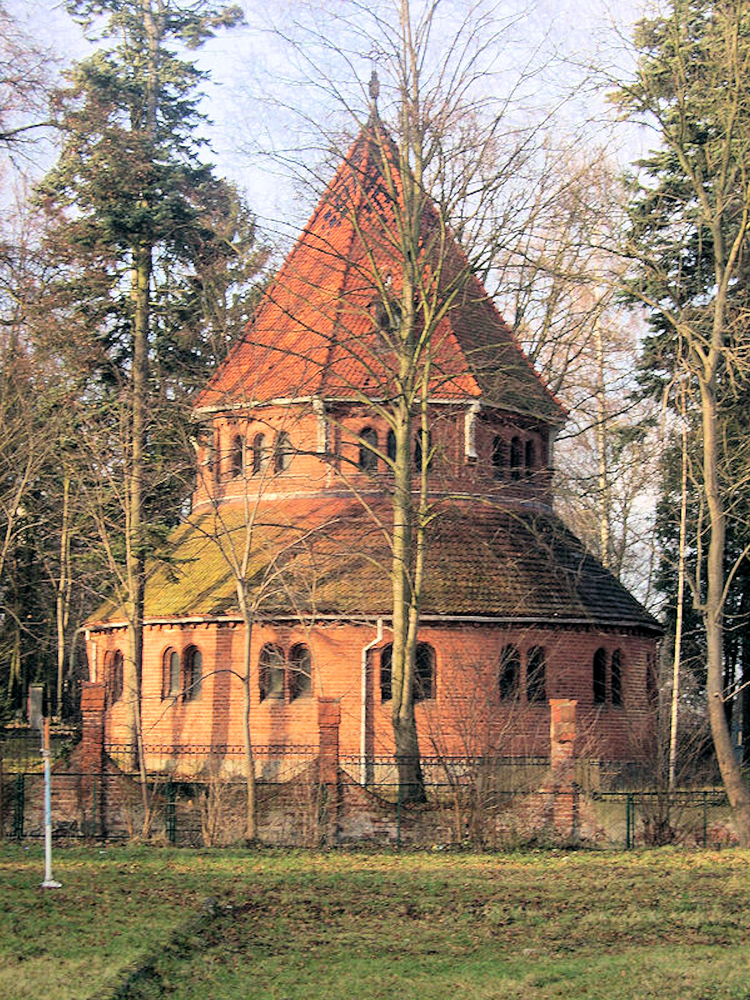 The orthodox church is located on Kujawska Street, but the most convenient way to get there is by coming from Aleja Zdobywców Wału Pomorskiego[Avenue of the Pomeranian Wall Conquerors]. At its junction with 12 Lutego [12th of February] Street, there is a big car park. It is best to start there and then go through the main gate of the historical cemetery.

The small building of the present orthodox church has an interesting architectonic form. It was built in 1876 as a protestant graveyard chapel. It was financed by a German aristocrat - Maria von Helke. Location of the chapel’s foundations was influenced by the already existing cemetery, which functioned as evangelical cemetery until 1945. Later, both the chapel and the cemetery have become orthodox.

The chapel is a rotunda with eclectic elements. It was designed on a plan of a double circle. It is a two-storey building with and outer porch. It ends with a steep, multi-pitched, pyramid, slate-tiled roof. The building’s façade is made of red brick with a barrel vaulting and a tiled roof.

The main entrance, located on the western side, is a part of the portal which ends with a high Tudor arch and is ornamented with rosette windows. This element is worth an attention, because it wasn’t common in this region. This may suggest that Maria von Helke ordered the design from architects who were not connected with Wałcz Land. The first and second floor is equipped with strips of double arched arcade windows. Windows on the upper floor are visibly smaller. The interior of the chapel is double the height of the porch. It was a coincidence that the building, whose initial destination was different, represents style typical for orthodox churches, where the circle symbolizes eternity and infinity of the Orthodox Church.

After the World War II, in May 1947, Powiatowa Rada Narodowa [the National Poviat Council] issued an official permit which allowed the followers of the Orthodox Church to take over the building. In 1947, after the necessary renovation and adjustments, the fist mass was celebrated, on Saint Faustina’s Day. Initially, only the most basic adjustments were made: provisory iconostasis, throne and altar were installed. In the following months, intensive work had been done to improve the look of the interior. For that purpose, the followers not only offered part of their earnings, but they also brought some gifted interior elements from other orthodox churches e.g. books and vestments. On Easter 1948, the church gained a proper appearance. Later, more and more elements were added and minor renovation works were done. In the 1990’s, it gained a “new” antique, 18th-century iconostasis, which came from the dismantled orthodox church in Treścianka. Moreover, the church gained 18th-century icons and the 19-th century gospel book. Nowadays, a tall, ornamented iconostasis covered with icons separates the nave from the sanctuary, where the altar is located. In the iconostasis, there is one of the three ornamented doors. The one in central part is called “Beautiful Gate” which can only be used by the clergy. On the Beautiful Gate there are icons which portray scenes from Christ’s Resurrection, and the remaining icons show the Four Evangelists. Over the Beautiful Gate there is an icon with The Last Supper. On the right side of the iconostasis there is an icon depicting Christ. There are also the Deacons’ Doors with the icon of the first deacon – Saint Stephen, and above the right side, there is a scene of the birth of Jesus Christ. On the left, there are the icon with The Holy Mary and the Child, the icon of the Michael, and above them there are the icon of Christ’s Resurrection and the icon of Saint Nicholas. In the sanctuary there is an altar with the gospel book and the tabernacle. On the left, there is an icon of Saints Cyril and Methodius, and on the pulpit there is a replica of Rublev’s icon of The Holy Trinity. Next to it, there is the epitaphios- canvas portraying the Burial of Christ. In the centre, there is also a candlestick, which is used for burning, tall, thin candles, characteristic for the Orthodox Church. Every visitor can buy such candle and lit it for their family and friends’ health.