The Polish Arms Museum
The centre is within the paid parking zone and the network of one-way streets. Getting to the area of ​​interest by E. Gierczak Street is only poss...
04-07-2015 ·
The Assumption of the Blessed Virgin Mary church
Home / Plan your trip / Practical information / Places of religious cult 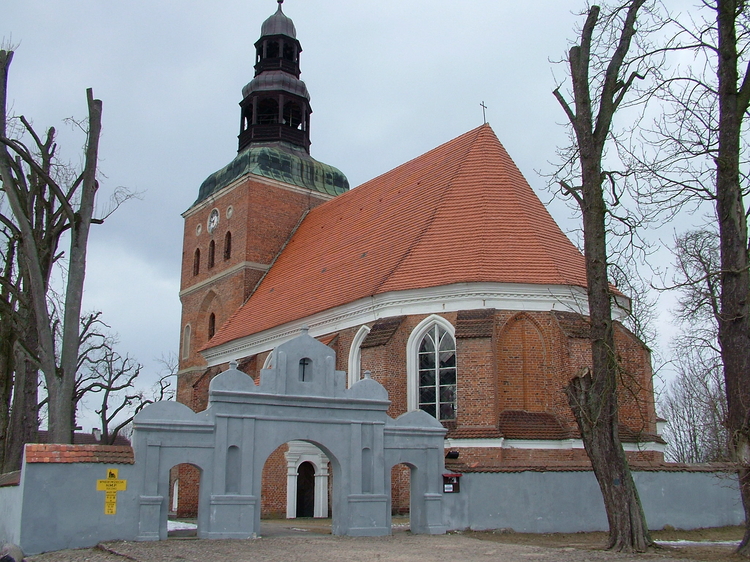 The church is located at the south-western frontage of the market square, near the Castle of the Wedel-Tulczyński family. Driving along M. Konopnickiej Street, one needs to turn into Zygmunta Augusta or 1 Maja Streets. Both lead towards Zamkowa Street, and further to Moniuszki Street – the churchyard can be accessed from both these streets.

The first clear mention about the church in Tuczno dates back to 1335. It is likely, however, that the church had already existed in the 11th century. In 1338, there are records of the Blessed Virgin Mary parish church and of the priest of this church. In 1395, a fire destroyed the church, but it was very quickly rebuilt, which can be concluded from the records of 1397.

In 1522, Maciej von Wedel-Tuczyński started the construction of a brick church. The process lasted 6 years, and as a result, a massive, late Gothic hall church was erected. It was a three-nave church with four bays, with a pentagonal presbytery located from the east. The eastern bays of the aisles were built on a trapezoid plan. From the west, an almost square-shaped tower was added. It has a cylindrical stepped turret near the south-eastern corner. The tower was topped with a baroque cupola. The building is supported by a number of buttresses with offsets; the façades are decorated with cornices at the bottom and the top of the walls. The western bay and the northern and southern side of the tower are embellished with blind windows. Throughout the ages, the building was repeatedly destroyed, but each time it was rebuilt, maintaining its original appearance. Among the documented events was the collapse of the tower in 1636; in turn, in September 1640 the church was consumed by a fire together with the majority of the town buildings. After the fire, a new tower was built, as well as a sacristy and a vault. After the reconstruction, the church was consecrated in 1660. In 1838, the roof and the cupola of the church tower burnt down.

There are many interesting historic elements inside the church. The star-like vault, with its diagonal ribs, forked at the corners, and transverse ribs, is worth noticing. The space of the vault is filled with frescoes of geometrical and plant motives. In the aisles, intermediated ribs can be seen. There are beautiful octagonal pillars between the aisles and pilasters located from the east and the west, standing on pedestals, with trim at the bottom of vault ribs. The baroque high altar contains paintings most likely made by Herman Han, a painter from Gdańsk. It is also possible that Han created sketches and the paintings were finished by his pupils. In the right lower corner of the painting of “The Crowning of the Blessed Virgin Mary”, an image of Krzysztof Tuczyński can be seen. Four early baroque side altars from the first half of the 17th century contain historic paintings; there is also a rococo side altar of the Guardian Angel. Another noteworthy object is a beautiful baroque engaged pulpit in black, grey, and gold. Its base has the shape of an angel. The pulpit is richly embellished with ornamentation and covered with a hexagonal canopy with an openwork ornamentation and little angels holding the instruments of the Passion of the Christ, topped with a figure of a pelican. On the panels of the pulpit, there are portraits of the Doctors of the Church: St Ambrose, St Augustine, St Gregory the Great, and St Jerome. The paintings on staircase cover present St Stanislaw and St Adalbert. On the pulpit’s backboard, there is Christ the Good Shepherd.

There are two items dating back to the mid-17th century – a richly ornamented baroque pipe organ with a double casing and a baptismal font carved in stone in the shape of a diagonally pressed belly, covered with a wooden lid decorated with a scaly ornament. At the side wall of the nave, there are coffin portraits and tin coats of arms of Andrzej and Krzysztof Tuczyński.

In the basement of the church there are several crypts: six under the nave, one in the aisle, and one under the porch. They used to be available to tourists, but their current condition excludes such a possibility. In these crypts, members of the Wedel-Tuczyński family were buried.

More info: http://www.tuczno.koszalin.opoka.org.pl/
More on the topic:
Geolocation
Search nearby
The Assumption of the Blessed Virgin Mary church
COMMENTS
Sign in to leave a comment.