The ruins of a Gothic church
The foundation of St Nicholas's Church is dated from the turn of the fourteenth century. The Gothic church was built originally in the middle of a...
06-12-2015 ·

The town walls
Gryfino was granted civic rights in the second half of the thirteenth century. The then rapid development of the town led to the decision of...
12-01-2015 ·

Wieża Prochowa [the Powder Tower]
The tower was originally located within the town walls. Getting inside it was possible through the entrance located at a height of about 3 metres a...
09-05-2015 ·

Turkusowe Lake
Turkusowe Lake was formed on the site of a former chalk pit. A Portland cement factory, founded by Johannes Quistorp in 1829, operated in the nearb...
19-05-2015 ·

Maszoperia –– 6 D Museum
Maszoperia – the 6D Museum is a place which captures all senses of the visitors. There are 500 m2 of 3D paintings which are background for the...
26-04-2015 ·
The St Stanislaw the Bishop and Martyr church
Home / Plan your trip / Practical information / Places of religious cult 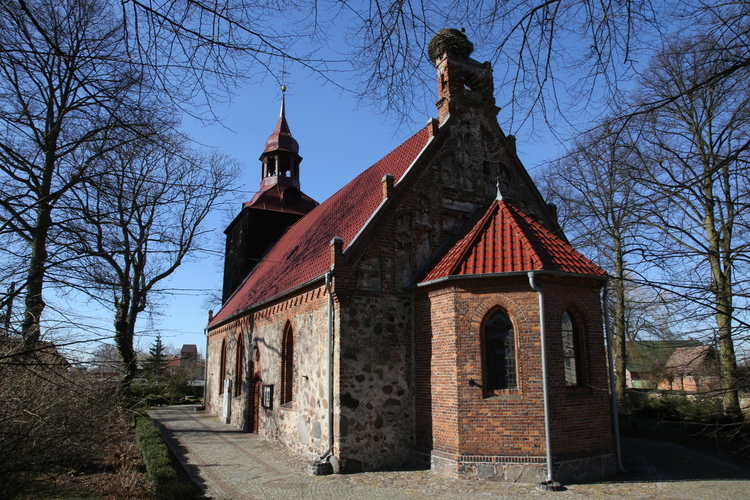 The church is located on a main street in the central point of the village.

The St Stanislaw the Bishop and Martyr church is one of the oldest historic buildings of the village of Kozielice. The church was built in the late Gothic style on a rectangular plan and comes from the turn of the 15th and 16th centuries. It is a building made of stone and brick with walls supported with buttresses. The major part of the building is dated back to the late Middle Ages (ca. 1500). In the 17th century, a tower was built. It consists of a lower brick part and an upper wooden part, topped with an octagonal lantern with a baroque cupola and a banner. A significant change took place in the 19th century, when the church was rebuilt. As a result of the reconstruction, numerous elements of the architecture and furnishings of the church was changed, which resulted in the church losing its previous arrangement and furnishings. During the reconstructions, an apse was built and covered the mediaeval elements. Moreover, a part of mediaeval architectural details was plastered.

While walking around the church, from the west, we can see the church tower with a framework structure with a baroque cupola at the top. On the eastern side, there are 10 blind windows – shallow bays in the wall, finished with lanceted and full arches. In the blind windows, we can see decorative architectural motives called tracery, characteristic of the Gothic style.

The church’s interior is furnished in the late Gothic style. It is worth noticing a choir, a pipe organ casing from 1889 made the Gruneberg company, and pews. An interesting element of the church’s furnishings was a silver chalice with angels’ heads on its handle. Unfortunately, this votive offering, presented by Jadwiga von Burgstorf, has not survived to the present day.  Till the beginning of the 1890s, the church was decorated by a baroque altar and pulpit, as well as by mural paintings of First Five Polish Brothers and of Polish Saints, but these elements have also not been preserved up to this day.

The parish was established in 1974.

The current parish priest is Rev. Władysław Kołtowski SChr (since 2014).

More info: www.kozielice.chrystusowcy.pl
More on the topic:
Geolocation
Search nearby
The St Stanislaw the Bishop and Martyr church
COMMENTS
Sign in to leave a comment.