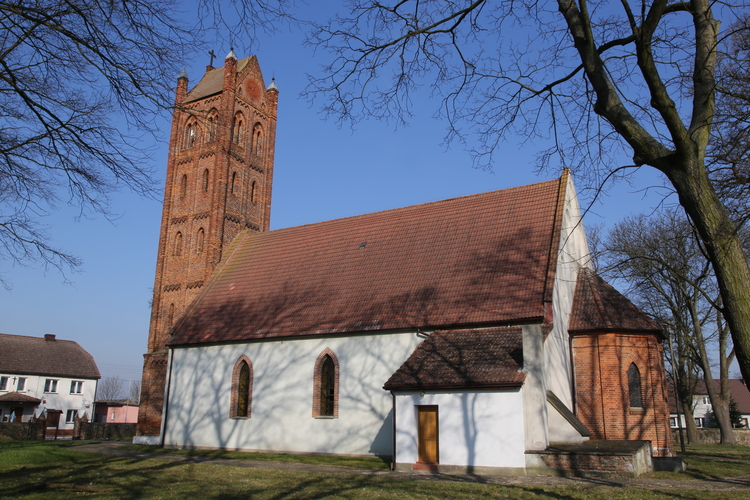 The church is located in the central point of the village, between Jana Pawła II and Niepokalanej Streets.

Bielice are a small mediaeval oval village. It was first mentioned in 1235, in a document of Warcisław Świętoborzyc, transferring Beliz to a knight by the name of Krzyżan, who just year later sold it to the Cistercians of Kołbacz.

Due to the actions during the Second World War, the church was deprived of the furnishings and left to its own fate, which resulted in its gradual deterioration. The sacral function of the church was not restored until 1963. During one of the refurbishments conducted in the previous century, the oldest part of the building was plastered, which resulted in losing its appearance characteristic of West Pomeranian churches.

During the last renovation works carried out inside the church, the 15th-century polychromies, hitherto hidden in a thick layer of plaster, were found. The fragments exposed during the probative examination allow the presumption that the entire polychromy depicts figures of saints, enriched with geometrical and plant motives. Because of the unique character of the paintings, both the historic preservation officer of the Szczecin-Kamień Pomorski curia and the representatives of the Provincial Historic Preservation Office in Szczecin declare to take up works aiming at their complete unveiling.

The church is surrounded by a low stone wall. The initial burial function of the churchyard is reminded by a newly built pre-burial chapel. At the entrance of the churchyard, there us a belfry with a bell commemorating John Paul II.

The parish was established in 1946.

More on the topic:
Geolocation
Search nearby
The Mother of God Queen of Poland church
COMMENTS
Sign in to leave a comment.