Domek Kata [the Executioner’s House]
Domek Kata on 3 Grodzka Street is a Gothic burgher’s house erected in the 15th century on a trapezium plan, which was motivated by a curved line of...
22-05-2015 ·
The St Peter and St Paul church
Home / Plan your trip / Practical information / Places of religious cult 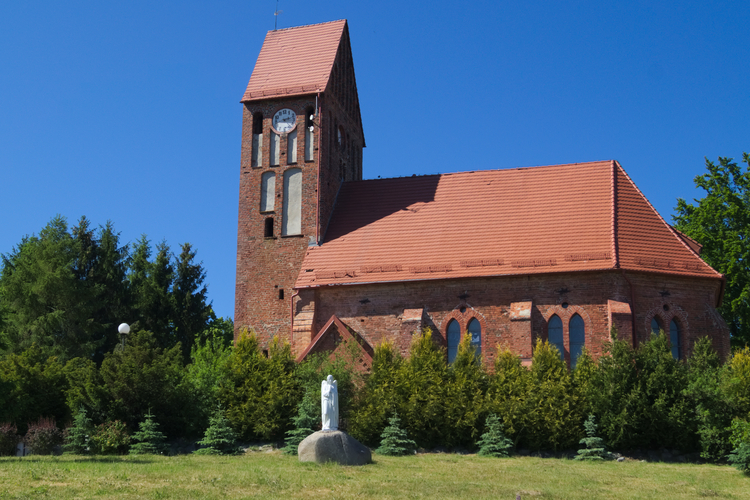 The St Peter and St Paul church is located on a hill in the central part of the town. There is a school in the vicinity of the church.

The church dates back to the 15th century. It is a three-nave hall church without a separated presbytery and with a tower located from the west. The church has not undergone any drastic reconstruction throughout the ages. Changes were introduced in the 19th century, when, during the renovation, windows were enlarged, a part of the tower was renovated, and a neo-Gothic vestry was added.

The church is austere in its form. Inside, the vault is the first thing that attracts attention. The nave has a star-like vault, and the side aisles have vault with transverse ribs. The plastered vault between the ribs is decorated with Gothic paintings dominated by five-pointed stars, but there are also plant twigs, circles, crosses, and trifoliate clovers. The paintings were discovered during the renovation of the church in 1966 and restored. They have different colours in different parts of the nave. They were mainly black, with green in the first and the second bay of the nave, and red with a small share of black and green paint in the rest parts of the nave. It seems that the paintings were made by two people. These in the first and the second bay of the nave are of much higher quality. Perhaps paintings made mostly with a red paint were made by a person who were finishing the work of their predecessor. The painting on the vault are so intriguing that they attract the attention of the visitors for a long time.

In 1992, during the renovation of the church, another element confirming the original Gothic style of the church was found. This time one needs to bow and take a look at the church’s floor. In the floor of the nave, square-shaped brick tiles were found, while in the southern aisle, the floor was made of various fragments – arrows, squares, irregular bricks. The fragment of the mediaeval floor can be seen under a thick pane of reinforced glass in the southern aisle.

In order to reach the church, visitors have to mount many steps leading to the hill. The St Peter and St Paul church is a parish church belonging to the deanery of Sławno. In front of the church, there is a car park.

More info: www.koszalin.opoka.org.pl/new/p.php?m=6&p=164
More on the topic:
Geolocation
Search nearby
The St Peter and St Paul church
COMMENTS
Sign in to leave a comment.