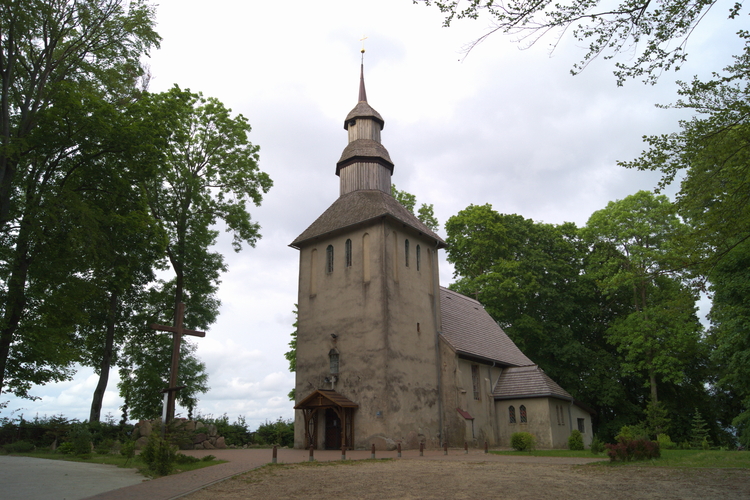 The church is located in the north-eastern part of the town, near a road leading to Janiewice.

The church dates back to the 15th century. In the 17th century, it was rebuilt at the initiative of Adam Podewils, the owner of the Żukowo possessions. Then, the furnishings of the church was completely changed. The brick church is built on stone foundations. From the west, the building has a tower with an octagonal, two-level wooden lantern. The tower has preserved its Gothic form in spite of the lantern added at the top of it. Over the tower’s entrance door, there is a small window opening closed on three sides. Above, there are shallow blind windows with full arches; between the blind windows, two window openings – also closed on three sides – can be seen. There is a chapel on the southern side. It is a single-nave church with an internal gallery and a presbytery closed on three sides. The windows are large, rectangular, with contemporary stained glass compositions.

People entering the building are struck with the beauty of the baroque furnishings of the church. The high altar, with the paintings of “The Last Supper” and “The Burial of Jesus Christ” and with the scene of the Crucifixion in the central part, is delightful. Equally interesting items are a baptismal font, a pulpit with a crown with the figures of four evangelists and three allegories of virtues, a choir, a pipe organ casing, and an internal gallery for the church’s benefactors. The baroque furnishings of the church are dated back to the 17th and the 18th centuries. Other valuable elements preserved in the church include a bell from 1599, baroque paintings of “The Triumphal Entry to Jerusalem”, “Christ and the Samaritan Woman”, and “The Sacrifice of Isaac”, as well as a crucifix from the 18th century.

The Transfiguration of Our Lord church is a parish church belonging to the deanery of Sławno.

More info: www.koszalin.opoka.org.pl/new/p.php?m=6&p=168
More on the topic:
Geolocation
Search nearby
The Transfiguration of Our Lord church
COMMENTS
Sign in to leave a comment.