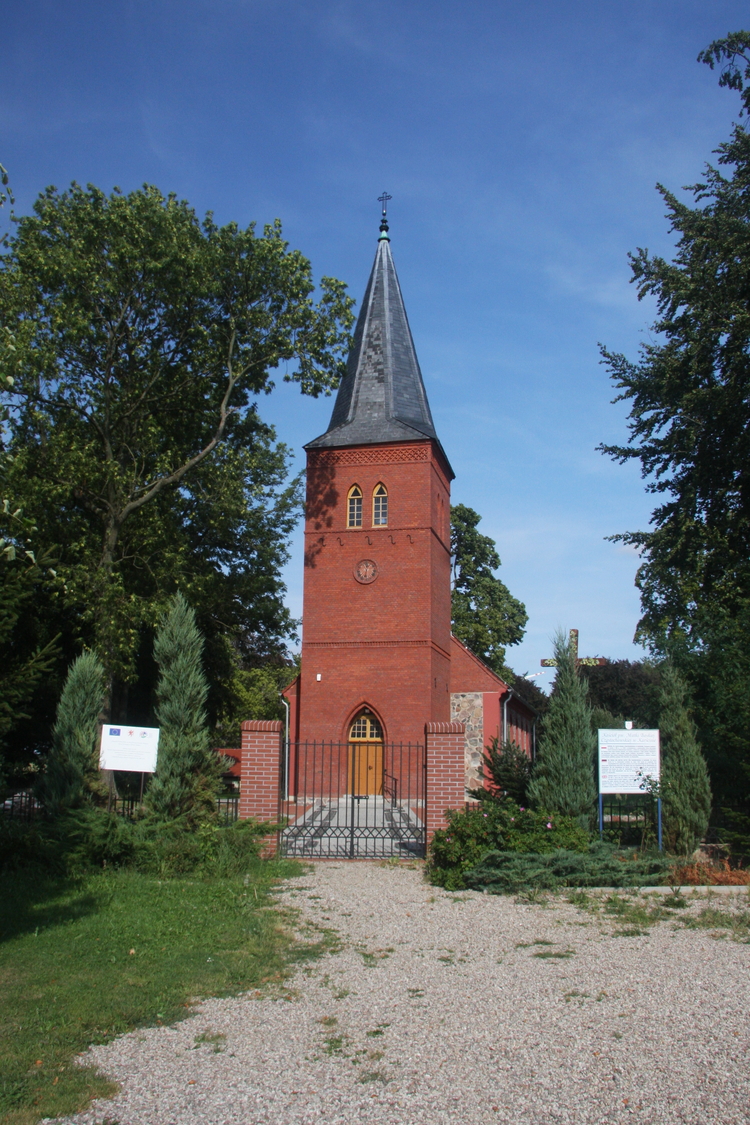 The Our Lady of Częstochowa church in Karścino is located in the vicinity of the park-palace complex. The village lies near a road leading to the north west, in a distance of 7 km from Karlino.

The Our Lady of Częstochowa church in Karścino is a Roman Catholic branch church belonging to the parish of St Peter and St Paul in Robuń. The church was built in the first half of the 16th century, but the appearance of the present building is a result of several renovations and reconstructions. Due to poor technical condition of the building, the largest reconstruction took place in the early 19th century. In 1830, the church was virtually completely rebuilt as a result of renovation works, but it maintained its form. Also, a wooden church tower was not altered. The newly built church obtained a style close to neo-Romanticism with elements of eclecticism. It was built of fieldstones. The oriented, aisleless building was built on a rectangular plan without a separate presbytery. In 1866, it was decided to pull down the old tower and build a new one. Hence, there is a three-storey tower built of burnt brick, topped with a multilateral cupola in form of a pyramid. The roof of the tower is covered with slates. The church has a lanceted, profiled portal, and lanceted windows. The flat vault is made of wood. A simple internal gallery made of wood, with out of order pipe organ, is supported by four pillars. Inside the church, it is worth noticing the baroque high altar from the end of the 17th century, a neo-baroque pulpit from the turn of the 17th and the 18th centuries, a baptismal font from the 16th century, eight wooden statues found in the church’s attic, which depict the figures of patron saints, an epitaph commemorating Sophie Charlotte von Manteuffel, three coverings on the altar, pulpit, and baptismal font founded by a wife of the church’s patron by the name of von Gaudecker in 1886. The church is beautifully situated. It was built near a road leading to a manor house. The building is surrounded by lindens and horse chestnuts. Behind the church, there is a large pond. The churchyard used to be a very picturesque place. A hornbeam growing next to the church gate is a natural monument.  Next to the entrance, there is a wooden mission church and a statue of St Mary on a brick pedestal. Behind the church, there is a currently not used cemetery. Thanks to the efforts of the commune of Karlino, the church has been refurbished lately. Everything is well maintained, well ordered, and developed. The churchyard is surrounded by a fence. There are steps leading to the church, which limits the accessibility of the building for the disabled.

More info: www.koszalin.opoka.org.pl
More on the topic:
Geolocation
Search nearby
The Our Lady of Częstochowa church
COMMENTS
Sign in to leave a comment.