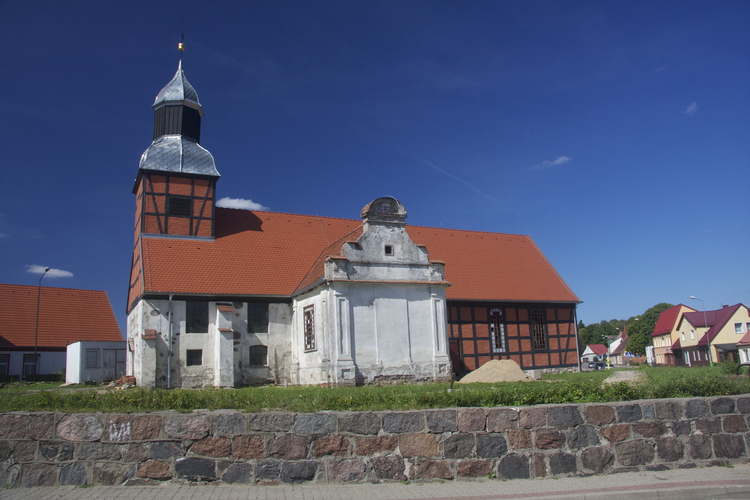 The church in Tychowo is located in the very centre of the village, on a small elevation.

The St Mary Help of Christians church in Tychowo is a parish church. It was built at the turn of the 15th and the 16th centuries from fieldstones. The church was most likely founded by the families of von Kleist and von Versen. In the 18th century, a nave was expanded by 13.4 m by adding a half-timbered structure. At the same time, a wooden tower was also added. In 1859, a neo-Renaissance chapel with an inner gallery for the proprietors of the village and the patrons of the church was built. Also, a sepulchral crypt was made in the vaults. It is not known what is hidden there, because the then parish priest had the entrance to the crypt bricked up out of concern for the peace of the dead. Through a window located in a wall of the crypt, two deep niches arranged in two levels are visible. There are eight children coffins in the crypt. In 1870, the upper part of the tower burned down along with a cupola. The tower was rebuilt with a two-level cupola with a lantern. The date of the fire is placed on a banner located on a cross crowning the tower’s cupola. The altar is situated by the western wall; there is a sacristy behind it. The former sacristy was transformed into a chapel, where a painting of St Joseph with Infant Jesus is located. The image was painted by one of the most known sacral painters in Poland – Adolf Kazimierz Hyła. It is worth mentioning that he is the author of the best recognizable image of the Merciful Jesus. In the church, there is a pipe organ made in 1936 and rebuilt in 1969.  The historic furnishings of the church include a wooden Gothic triptych – altar depicting the Visitation of the Blessed Virgin Mary from the 16th century, moved there from a branch church in Stare Dębno in 1976, and a baroque crucifix from the 18th century. In a side chapel, there is a large sepulchral plaque of Elizabeth Zeidler, who was probably a wife of the then pastor. The plaque is made of wood, painted with temperas and dates back to 1679. Currently, the church is being comprehensively renovated. Its condition, because of falling off walls and the ceiling, was dangerous for parishioners. The half-timbered structure is going to be preserved, but the filling of the walls will be changed. In order to save the church the Committee of the Revitalization of the Historic Church in Tychowo was established. It organizes the renovation of the building with the support from various institutions and philanthropists, erecting the church practically from its foundations. The church is nicely located, on a small elevation, surrounded by a stone wall. There is a figure of St Mary next to the entrance to the building. On the churchyard, there are two small-leaved limes grow, one with a circumference of 340 cm, and the other – of 410 cm. Both have the status of a natural monument. Because of the ongoing renovation works, the church is currently not available to tourists. The end of the works is planned for the end of 2015.

More info: www.parafia.tychowo.pl/
More on the topic:
Geolocation
Search nearby
The St Mary Help of Christians church
COMMENTS
Sign in to leave a comment.