Domek Kata [the Executioner’s House]
Domek Kata on 3 Grodzka Street is a Gothic burgher’s house erected in the 15th century on a trapezium plan, which was motivated by a curved line of...
22-05-2015 ·
The Mother of God of Perpetual Help branch church
Home / Plan your trip / Practical information / Places of religious cult 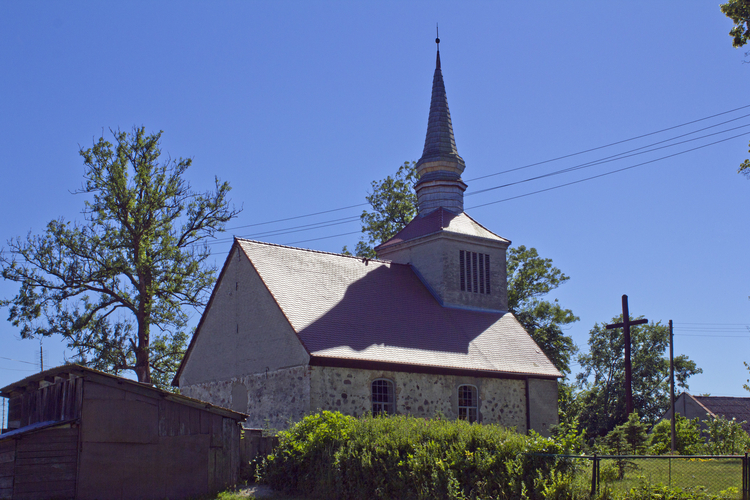 The Mother of God of Perpetual Help church in Oparzno is a branch church belonging to the Roman Catholic parish of St Mary Help of Christians in Rusinowo. The church was built in 1723, and rebuilt in 1912. The building was placed on stone foundations. The walls of the church were made of fieldstones with the admixture of breakstone and ceramic brick. The wooden strengthening structure of the tower has been preserved (four pillars clamped with transoms and reinforced by angle braces in each wall). As a result of a reconstruction carried out in 1912, the western wall, the tower, and the eastern rooftop was rebuilt in lime brick. At the same time, window openings were enlarged. The church presents the style of late baroque. It is a hall church without a presbytery separated from the nave. The building is oriented and was built on a rectangular plan. From the west, there is a quadrangular tower topped with a pointed cupola. The church roof is covered with galvanized sheeting, windows are rectangular. Inside the church, there is a wooden internal gallery supported with four pillars, which can be accessed by wooden steps. There is also a belfry in the church – two small bells are located there. The preserved elements of the church’s furnishings include a holy water bowl from red granite (most likely from the 12th century), a brazen neo-baroque chandelier from the late 19th century, and two red-bronze bells from the 19th century. The church is surrounded by a churchyard where trees (lindens, ashes, and horse chestnuts) are located along with a mission cross and an obelisk with a statue of St Mary that commemorates people who died during the Great War. There are no steps in the church, so the building is fully accessible for the disabled.

More info: www.koszalin.opoka.org.pl
More on the topic:
Geolocation
Search nearby
The Mother of God of Perpetual Help branch church
COMMENTS
Sign in to leave a comment.