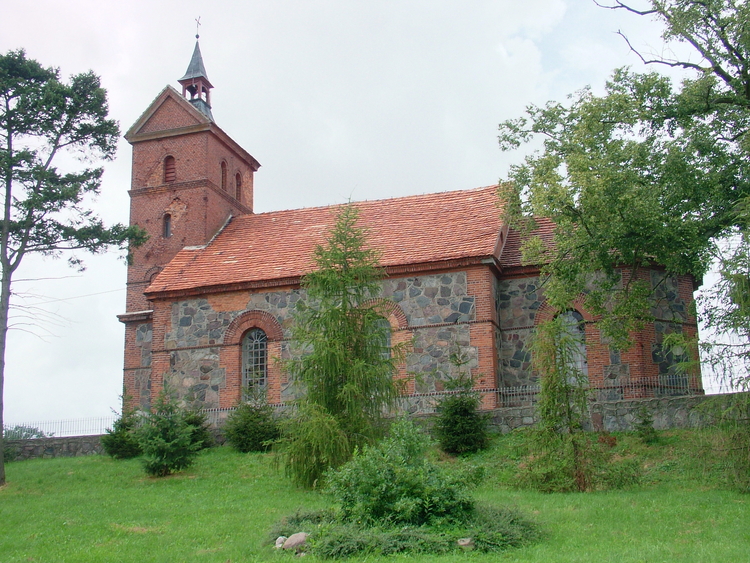 The church is located near a transit road in the centre of the village, on a relatively high elevation.

The first church in Dobino existed already in the early 14th century. It is not certain if this wooden building survived up to the 19th century or it was rebuilt in the meantime. There are, however, preserved records about Swedish troops plundering the church in 1635. Soldiers stole then, among other things, a precious chalice and 1000 guldens. In 1836 a brick building was erected in place of much damaged church. The new church was built in the neo-Romanesque style, of granite stones and ceramic bricks (corners, reveals, window framing, and cornices).  Initially, the building had no tower, which was added in 1909.

It is a single-nave church with a rectangular presbytery ending with a sacristy built on a half hexagon plan with a separate entrance in the eastern part. The main door, to which two wide steps lead, are located in the lower part of the tower, built in the first stage of the construction. It is a wooden, double, panel doors. The panels are filled with planks decorated with diagonal muntin bars. The fanlight is topped with a semi-circular arch, divided vertically into three parts, which were, in turn, divided into four uneven parts with muntin bars. The main entrance portal is topped with a semi-circular arch. The wall above the portal is built partially of granite rocks, but just over the cornice that tops the nave is fully made of brick. In the front wall, above the entrance portal, there are two semi-circular windows, and in both side walls, there are single non-plastered blind windows in form corresponding to the windows. Above them, there are additional, narrow, single windows. In the highest storey of the tower, in the front and the rear wall, there are two windows similar in shape but located somewhat differently than the windows on the lower storey. The side walls have single windows covered with wooden blinds. The church tower is covered with pitched roof topped with a quadrilateral roof lantern with conical cupola finished with a metal sphere with a cross.

The façades of the side walls of the nave are divided with two large windows topped with semi-circular arches. In the walls of the presbytery, there are three windows of the same shape. Architectural ornaments that enrich the appearance of the façades are string courses running around the walls of the building at the height of parapets and the intrados of the windows, and the cornices girding the tower.

Originally, the church in Dobino was a branch church of the parish of St Nicholas in Wałcz. In 1923, it was separated from this parish as a local curacy; in 1932 it became an independent parish. Nowadays, it is a branch of the Assumption of the Blessed Virgin Mary parish church in Skrzatusz.

More on the topic:
Geolocation
Search nearby
The St Peter and St Paul branch church
COMMENTS
Sign in to leave a comment.