Domek Kata [the Executioner’s House]
Domek Kata on 3 Grodzka Street is a Gothic burgher’s house erected in the 15th century on a trapezium plan, which was motivated by a curved line of...
22-05-2015 ·
The Nativity of the Mather of God branch church
Home / Plan your trip / Practical information / Places of religious cult 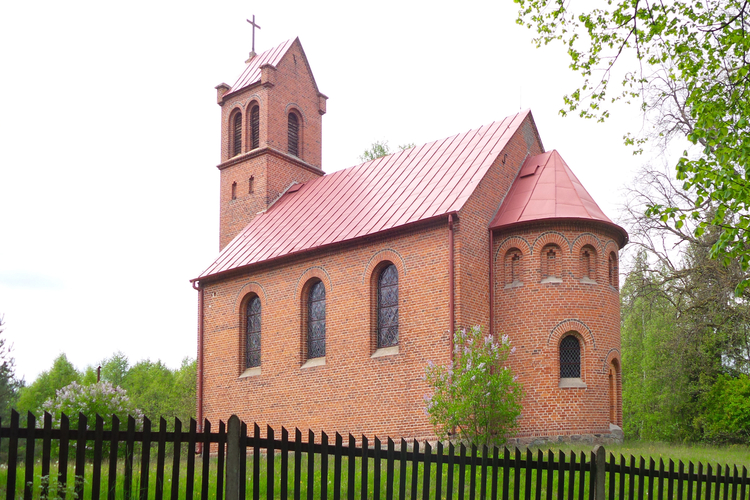 After driving 3.9 km from the beginning of the village of Głowaczewo from Wałcz, one needs to turn left at a junction – about 200 metres further, there is the church, located in the eastern part of the town.

It is a neo-Romanesque building from red brick, built on a foundation of hewn granite rocks. The church was designed as a single-nave building with a separated semi-circular presbytery and a three-storey tower incorporated with its rear wall into the main body of the church. Individual storeys of the tower are separated from each other with a decorative cornice. On the ground floor of the tower, there is the main entrance with a modest portal with a semi-circular arch accented with a brick band. The main entrance has double panel doors with a semi-circular fanlight filled with a stained glass composition, in the middle of which there is an isolated brick circle with an even-armed cross. In the middle storey, there is an oculus with glass plate divided into four parts. Above the oculus, there are three little, symmetrically located, non-plastered stepped blind windows. Each side wall of the tower has two identical blind windows at the same height. The front façade of the upper storey is embellished with a mock triforium – in the middle there is a windows with a semi-circular top and covered with a wooden blind; on both sides there are non-plastered blind windows in the same shape, proportionally smaller. The entire arrangement is encompassed by a mild arch of a portal with a setback. At the same height of each side wall, there are two similar windows also covered with wooden blinds. The church tower is covered with a gable roof, decorated with little, cubically profiled pinnacles, and topped with a metal cross.

The side façades of the main body of the church has symmetrically located windows (three windows on each side). The windows are topped with mild arches highlighted by semi-circular brick arches in contrasting colour and filled with contemporary stained glass compositions. Stained glass is located also in both windows in the presbytery, but these windows are significantly shorter.

On the ground floor, between the windows, there is a bay imitating doors, with a panel profiled like the other panels decorating the presbytery, with a stepped upper part. Seven such blind windows with two setbacks each are an interesting decorative composition of the upper part of the presbytery.

More on the topic:
Geolocation
Search nearby
The Nativity of the Mather of God branch church
COMMENTS
Sign in to leave a comment.