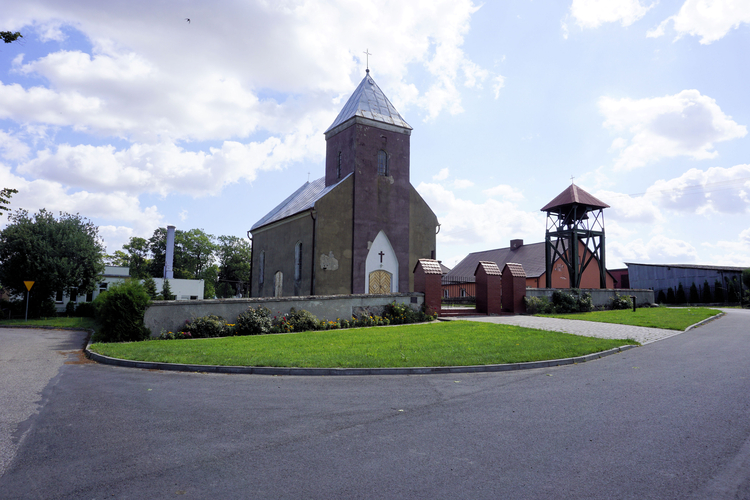 The church is located in the middle of a village, by road no 179 between Dobino and Piła, in the vicinity of a school. The area, where the church is located, a former churchyard cemetery, is surrounded by a low wall made of granite rocks.

The first mention about Gostomia comes from 1357, but a clear piece of information concerning a church in the town is in a document from the second half of the 18th century. Until 1945, there was an Evangelical church there, belonging to the community of Różewo and a Roman Catholic church – a branch of the parish of Róża. The Evangelical church has not survived to the present times, while the Roman Catholic church, erected in 1818 and consecrated in 1820, has been functioning up to this day as a branch church belonging to the parish of St Laurence the Martyr in Różewo.

The building was built on a rectangular plan with a pentagonal presbytery with a separated part for a sacristy, which forms a bypass from the rear side of the altar. The square-shaped tower is almost entirely within the main body of the church, and is, in its significant part, a remnant of the tower of the older building. Such an arrangement of the tower and the nave resulted in the formation of annexes on both sides of the tower. Also, from the previous church built in 1641, a baroque high altar has been preserved. Until the 1980s, there was also the top of the tower in a form of a multi-level cupola with a roof lantern, sphere, and a steeple. Nowadays, the tower is topped with a low, pyramidal, four-hipped cupola with a metal sphere crowned with an openwork cross.

The body of the current church is built of ceramic bricks on granite foundations; the ground part of the tower is made of brick, while the upper storeys of the tower were made in half-timbered structure filled with bricks.  What is worth seeing inside is a barrel vault with lunettes above the windows and three paintings depicting St Mary. The rood arch that separates the presbytery from the nave is decorated with a polychromy with puttoes, cornucopias, grapevines, acanthus twigs, Latin inscriptions on blue sashes, and figures of kneeling angels. The balustrade of the internal gallery is made of planks on which panels decorated with rosette ornaments are painted. What is also worth noticing is the baroque high altar from about 1700, on a chest altar stone, with the statues of St Anthony and St Christopher and the paintings of “The Baptism of Jesus in the Jordan River” and “The St Michel the Archangel Fights the Satan”. There is also a rococo-classicist pulpit from the beginning of the 19th century, a baroque side altar from the 18th century, as well as 19th-century altar and figural stained glass windows.

Within the fenced area there is also a chapel, a belfry, and a mission cross.

More on the topic:
Geolocation
Search nearby
The St John the Baptist branch church
COMMENTS
Sign in to leave a comment.