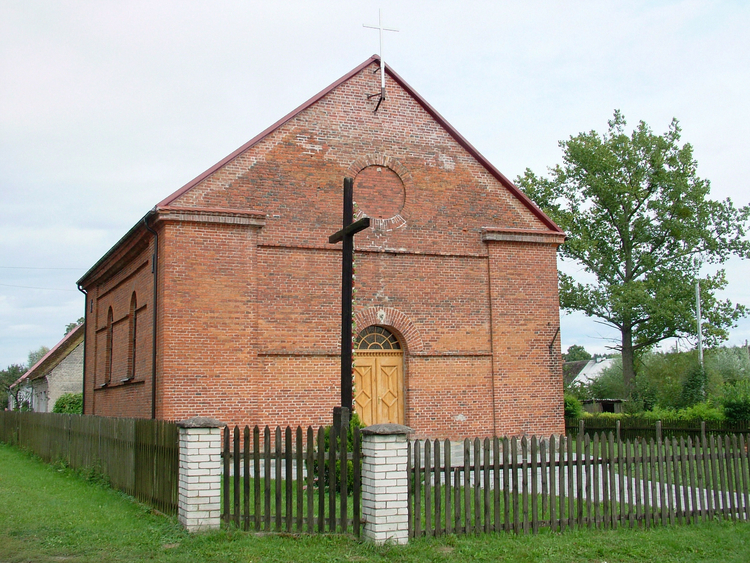 The church is located in the centre of the village. In order to reach it, one needs to go straight on at the first junction from Wałcz, and turn right at the second junction.

The Evangelical church in Prusinowo was built in 1843 or 1863 – there are different records concerning the date. What is certainly known is that the present church was built in 1865 as an Evangelical church. A Roman Catholic church had been present in the village already prior to 1641 and belonged firstly to the parish of Tuczno, then – of Nakielno. In the records coming from this year, a building with a half-timbered structure is mentioned. In the first half of the 18th century, the church was thoroughly refurbished or even rebuilt anew. Apparently, the result was poor, because the church was pulled down in 1864 and a new building was erected in its place in 1865. This, in turn, was significantly damaged in 1945 and pulled down in the 1950s.

Currently, the former Evangelical church, consecrated in 1947, is used as a Roman Catholic church.  The church was built on a rectangular plan without a tower, with modest furnishings, covered with a gable roof. In the gable wall of the building, there is an entrance portal with wooden double doors and a semi-circular fanlight. At the top of the wall, there is a circular, non-plastered blind window isolated from the wall by a brick band. Two cornices made of protruded single rows of bricks divide the gable wall into three parts. Wide pilaster strip emphasize the corners of the building; in the gable walls, they are topped with eaves coming out of side walls.

In each side wall, there are two symmetrically located windows with a semi-circular top. The rear gable wall, decorated with corner pilaster strips and two cornices only, has still preserved the traces of a window, which was once bricked up.

In 1978, a wooden belfry was erected next to the church. Later, it was rebuilt and obtained a metal structure.

More on the topic:
Geolocation
Search nearby
The St Mary of the Rosary branch church
COMMENTS
Sign in to leave a comment.