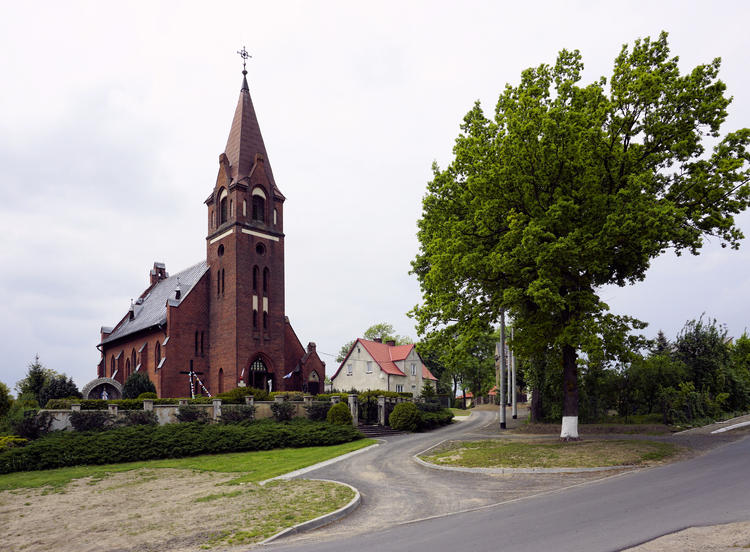 The church is located in the southern part of the village of Różewo, at the fork of the road leading to Wałcz with national road no 179.

The earliest preserved mentions about the church in the town date back to the beginning of the 16th century – at that time a seat of a parish was located there, but already in the 17th century Różewo belonged to the parish of St Nicholas in Wałcz. In 1706, in turn, the church in Różewo – on the strength of a decree of Bishop Wojciech Tolibowski – was incorporated into the parish of Skrzatusz. Several years earlier, a new church was built in the village – it is a building with a half-timbered structure filled with bricks, without a tower, with a free-standing belfry, which replaced a previous wooden chapel. The preserved church documents show that in 1865, by the decision of the parish priest of Skrzatusz, services in the church in Różewo was to be celebrated only three times a year.

In the late 19th century, the half-timbered building of the church was damaged to such an extent that there was danger of its collapsing. It was decided, thus, that a new Roman Catholic church should be built – all the more so because a half a century earlier an Evangelical church had been built in the village. The construction started in 1898 or 1899 and was finished in 1905. Shortly after the end of the construction, also in 1905, the church was consecrated. In the post-war period, the building was a branch church of the parish of Skrzatusz, but since August 28th, 1998, it has been an independent parish belonging to the deanery of Wałcz.

It is a neo-Gothic building made of ceramic brick in a cross bond on a foundation of granite stone bound with concrete mortar. The foundation is separated from the brick façade with a small cornice.

The church was designed as a single-nave building on a rectangular plan with a square-shaped presbytery from the west and an also square-shaped tower adjacent to a bipartite annexe of a side porch and a staircase leading up the tower and an internal gallery. At the meeting point of the nave and the presbytery, there is an L-shaped sacristy. The main body of the nave is covered with a pitched roof bent in its lower part. Each slope in this part of the roof has two dormers covered with a gable roof with triangular slopes, topped with a metal steeple with a sphere at the end. The western gable of the body ends with a three-level pinnacle. The gable wall of the presbytery is decorated with a single blind window and topped with a pinnacle. On the side edges of the gables of the body and the presbytery, corner buttresses were transformed into pinnacles covered with gable roofs. Buttresses with two setbacks support the walls of the sacristy and the nave, dividing the façade into segments where lanceted windows are located. In the middle part of the wall of the body, there is a triforium with a dominating central window.

The front wall, in which the tower is incorporated, has doubled, very narrow small windows divided into four parts, symmetrically located on two heights; this kind of biforia are located in the side walls of the tower, at the height of the second storey, just underneath oculi. In the front wall of the tower, there is main entrance door in a lanceted brick portal with three setbacks; on the same storey, there are single, narrow, lanceted windows in the side walls of the tower. The tower looks very interestingly – over the entrance portal, at the height of two upper storeys, there are two horizontal bays, each with two lanceted windows connected  with plastered blind windows. This architectural composition is crowned with a centrally located oculus. The second storey of the side walls of the tower is devoid of windows; in the third storey, there are twin, narrow, lanceted windows and an oculus is located over them. The next, fourth, storey of the tower is separated from the lower levels by a string course emphasized by horizontally elongated, rectangular panel friezes. The highest level of the tower looks alike from each side: there is a window in the middle, with a wooden blind, ending in a flat arch and topped with a crescent-shaped, plastered blind window and with lower, narrow, plastered, curved blind windows on both sides.

The tower is covered with a tall, pyramidal, four-hipped cupola with roof slopes bent at the base and pierced by pinnacles that tower over the central windows. The tower’s cupola is topped with a metal, openwork cross located on a metal sphere.

The furnishings of the church is mostly historic, dating back to the times of the construction of the building. It includes a high altar from 1900 in a very interesting form of triaxial wooden retable with the predella, interesting figural stained glass windows with an additional ornamental decoration, a candlestick, and two lanterns. There are two bells in the tower – the first from 1828 and the second from 1925 – both with German inscriptions.

More on the topic:
Geolocation
Search nearby
The St Laurence the Martyr parish church
COMMENTS
Sign in to leave a comment.