The parish church of the Blessed Virgin Mary Queen of the World
The church was erected in several stages from the end of the thirteenth century to the fifteenth century. It was rebuilt several times at that time...
07-04-2015 ·
The Łasztownia Island
Szczecin 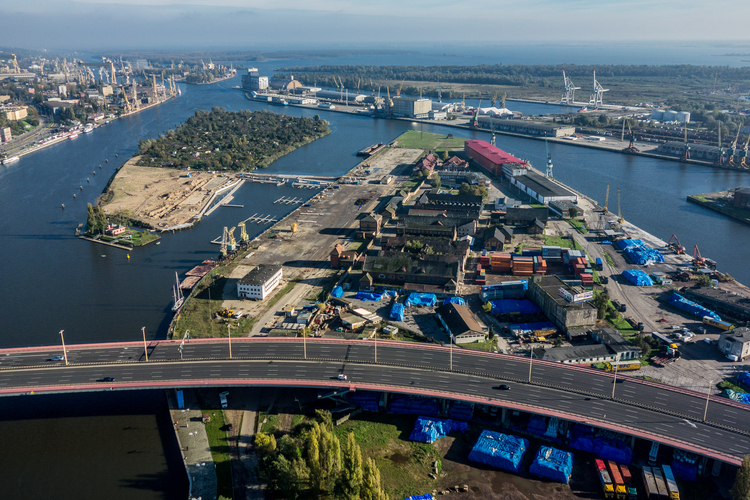 The name Łasztownia (Latin: Lastadia) derives from Latin words “lastagium”, “lestagium”, and “lastadium”. They meant the weight of a cargo. In the 14th century, a “łaszt” (Polish last) became a commonly used weight unit of the shiploads. It was also used for dry goods, particularly grain.

Knowing the etymology of the name, it is easy to guess at its destination. It was, however, used as a harbour not earlier than since 1283. Originally, the island was significantly smaller. It can be said it was a coastal islet opposite the present Długi Bridge. The present Łasztownia Island was situated on the route from Dąbie to Szczecin. In the abovementioned year of 1283, Szczecin bought the rights to the island. This purchase was motivated by a dynamic development of the trade harbour and the increased cargo traffic connected with the situation. The city needed new areas for its expansion. Wooden jetties and platforms for loading and unloading cargo were built on the island. There was also a loading crane, granaries, and various warehouses. The further dynamic development of the harbour led to the incorporation of another island. The 14th-century sources used the name Łasztownia for all islands north of the Parnica River. The particular regions of Łasztownia were made unequivocal by adding the name of the factory; for instance, the Łasztownia Shipyard (“schippbuwer lastadie”) built in 1500. In the 17th century, Łasztownia was considered a strategic point, which resulted in surrounding the island with earthwork embankments. They were made along the present Bulwar Gdański and Władysława IV Streets. In 1727, two stone gates (Parnicka [the Parnica Gate] and Kozia [the Goat Gate]) were built. In the 19th century, the fortifications were deemed to be useless and pulled down.

The current street arrangement comes from the first half of the 18th century and is connected with putting the area of Łasztownia in order during the rule of King Friedrich Wilhelm I of Prussia. At the turn of the 19th and the 20th century, the 18th-century buildings were mostly replaced by new buildings representing the Art Nouveau style. The shortage of flats resulted in building tenement houses for workers on the harbour island. Also, factories and production plants, such as a sugar factory (currently the “Gryf” S.A. Sugar Industry Enterprise) were built. During the Second World War, Łasztownia was bombed by regular Allied bombing raids (1942-1944). After the war, Łasztownia was dynamically developed by companies connected with the sea. The Polish Steamship Company, the “Żegluga Szczecińska” Steamship Company, or the Customs Office have their headquarters there. A part of the buildings erected during this construction boom is currently empty. They attract cultural events, such as open-air performances or music festivals.

More on the topic:
Weather
Media
1