The Polish Arms Museum
The centre is within the paid parking zone and the network of one-way streets. Getting to the area of ​​interest by E. Gierczak Street is only poss...
04-07-2015 ·
Fontanna Wielkiego Raka [Great Crayfish Fountain] in Moryń
Moryń 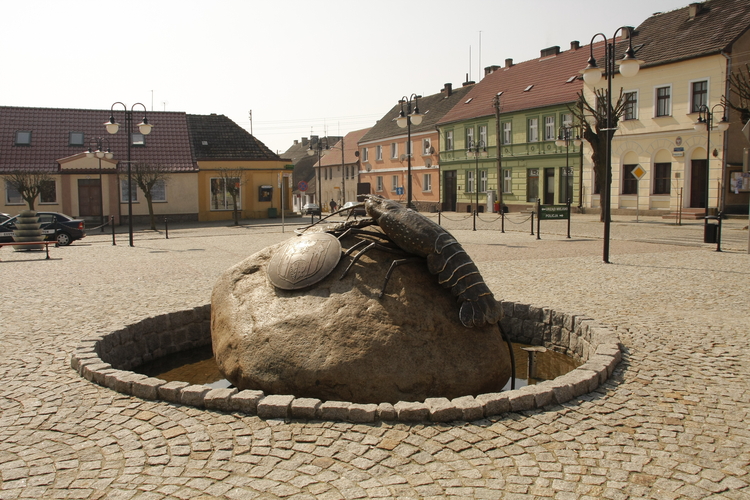 Wielkiego Raka Fountain in Moryń is situated near the Town Hall on the Wolności Square [Liberty Square] opposite Dojazdowa Street.

Great Crayfish is a fictional character from a town legend, which is more than 300 years old. The German residents of the town used to tell the story of a crayfish, the story of which was supposed to take place a very long time ago. Moryń was attacked by invaders who surrounded the town and waited for the residents to give up because of hunger. One of the brave knights defending the town volunteered to cross the lake and find help. His name was Crayfish. Thanks to his wit, he avoided the invaders’ patrols and found help, but on his way back his enemies surrounded and killed him. Before he died, he managed to scream to the other residents that help was coming. Hit with an axe on his head he fell into the lake. Supposedly up until now at night a great crayfish emerges from the lake and gets closer to the town. Great Crayfish Fountains was revealed on the Wolności Square on the 20th of September 2008. The metal animal is placed on a huge rock, next to which there is the crest of the town.

More on the topic:
Geolocation
Search nearby
Fontanna Wielkiego Raka [Great Crayfish Fountain] in Moryń
COMMENTS
Sign in to leave a comment.