The Observation Tower
In the late 19th century, in 1895, in the time of mayor Ernest Melcher, a tower was built in honour of soldier fallen during the Prussian wars with...
30-04-2015 ·

The suspension bridge
For many years, there has been a bridge connecting the Bukowina in Wałcz with the forest on the other side of Raduń Lake. The name of the bridge -...
09-02-2015 ·
The Łarpia River
Police
Home / Discover / Nature / Rivers and channels 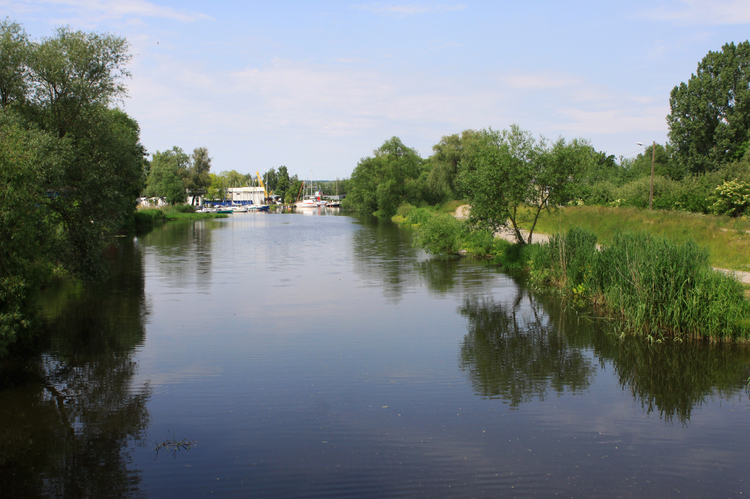 The Łarpia flows along the eastern borders of Police. The Łarpia flows from the northern part of Skolwiński Ostrów, begins its course from the Cieścina and heads westwards to the housing estate of Mścięcino, then flowing toward the north near the Old Town. It flows into the canal of former synthetic petrol factory, where it bends toward the east to the Szczecin Lagoon. The Łarpia waters with the Oder - Domiąża and the Police Stream surround Polickie Łąki [the Police Meadows], which is the largest island of Police. Access to the river banks is primarily in the area of ​​the Old Town of Police, where You can find a harbour. The public bus stop of the lines no. 102, 103, 106, 109, 110 and 111 is located nearby. The Samorządowa Line connecting Police and Trzebież also stops there.

The Łarpia is a western tributary of the Oder - Domiąża. The Przęsocin Stream flow into the Łarpia near the Isle of Police Meadows. The river is approx. 5.8 km long, and the bed width is extremely varied, so it is from 15 to 100 metres at different places. The Łarpia River is an indispensable element of the landscape of Police. It is important for the town. Since the Middle Ages, it has served the residents of this area as a place of fishing; and, over time, has also become a navigable river with a port and marina, where a shipping connection with Szczecin and Świnoujście existed. A river shipyard began to function in the twentieth century, where smaller and larger vessels were built and repaired. Unfortunately, the Łarpia lost its erstwhile importance after World War II. Not until the beginning of the twenty-first century were efforts made to restore the river to its former splendour. The Ecological Society Łarpia was established in 2013 in the area of Police. It aims, among other things, at cleansing the river, promotion of natural and tourist sites located there. What is located on the banks of Łarpia in the so-called is: Polish Anglers Association marina, marina Olympia, WOPR [Volunteer Water Rescue Service] Police harbour and the marina of Student Sports Club Bras Police. It is the perfect place for not only sailing because the Łarpia is not long yet very interesting canoe trail. Together with a section of the Oder, it forms the so-called Łarpia Loop, in the centre of which the already mentioned Police Meadows are located. The river is rich in various species of fish such as perch, pike, tench, stickleback, roach, rudd, bream and many others. You can find there also crayfish and mussels. It is therefore a real paradise for anglers who frequently crowd at the banks of the river near the canal at the Chemical Plant and near the Old Town of Police. Since 2008 an annual cultural - entertaining event has been organised there, under the name of Łarpia Sail Festival, which promotes sailing and sailing songs, or sea shanties. The modernised Łarpia marina is vibrant with life, and the river banks should be admired from the water side, for example during kayaking trips.

More on the topic:
Geolocation
Search nearby
The Łarpia River
COMMENTS
Sign in to leave a comment.